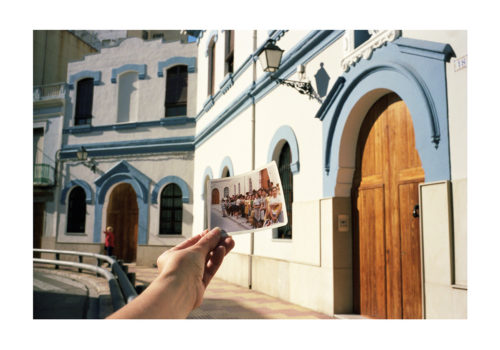 The exhibition of the winners of the Fondation des Treilles Residence Award at Initial Labo will run until March 27. The exhibition is an opportunity to discover the work carried out by the winners during their residency in 2020, Sylvie Hugues, M’Hammed Kilito and Jean François Spricigo.

Since the creation of the Photography Prize in 2011, each year the winners selected for a photographic project dealing with the Mediterranean world bear witness to the historical, societal and artistic evolutions of this “Grand Bassin”. The Foundation gives the winners the logistical and financial means to carry out their project. They are welcome in the domain of Treilles for a residence.

Sylvie Hugues has been a photography consultant and artistic director of the Festival du Regard since 2016.

In 1992, she participated in the creation of the magazine Réponses Photo, of which she was the editor-in-chief from 1996 to 2014.

As a photographer, she has published two books: “On the beach” with Filigranes editions and “Fra-For” with Verlhac editions. As a journalist, she co-wrote “Conconce un portfolio” with Eyrolles editions and “digital photography in ten lessons” with Minerva editions.

Photographer M’hammed Kilito’s work deals with questions of identity, memory, migration and social determinism. M’hammed is a Magnum Foundation scholarship recipient (2018) and participated in the Eddie Adams Workshop (2019). He also received a grant from AFAC (Arab Fund for Arts and Culture) and funding from the Prince Claus Fund (2018).

His work has been presented to the Sharjah Art Foundation (Sharjah) and Tate Modern (London), among others, and published in The Wall Street Journal, World Press Photo, El Pais and the Washington Post. He is a member of the African Photojournalism Database – a project of the World Press Photo Foundation and Everyday Africa. He also contributes to Everyday Middle East and North Africa, a collection of images that give a more accurate view of everyday life than what is typically seen in the media about the region.

He studied photography at the Ottawa School of Art and holds a master’s degree in political science from the University of Montreal.

A man with an enthusiastic tendency, quick to wonder and quite impatient, Jean-François Spricigo is not convinced by the need to define oneself through a profession, or by possible medals and other scars, or by anything whatsoever. elsewhere.

Each day he discovers the intensity of the tranquility, welcoming the necessary storms – sometimes disturbing but always bright – which arise from the mysteries of the night, from the mystery of Life. He would like to thank from the bottom of his heart the generous outstretched hands of his fellow creatures, citing haphazardly , each implicitly inviting the others: Jacques Brel, Henry David Thoreau, Nine Inch Nails, Friedrich Nietzsche, Osamu Tezuka, Pierre Desproges, David Lynch, Itsuo Tsuda , Alfred SchniQke, Eric Baret, Franz Schubert, Jiddu Krishnamurti, Hiko, and for the occasion the Treilles Foundation to give him the wings towards his new horizon.

He unconditionally loves nature and animals; step by step, he finally lives serenely the inconstancy of the specie to which he belongs.