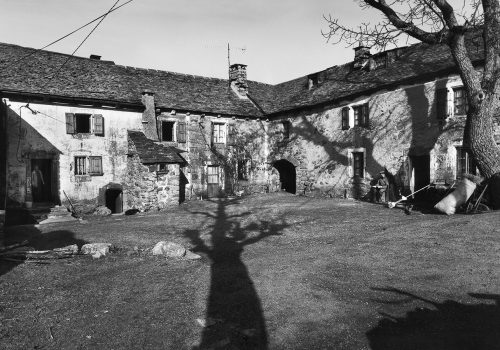 “To photograph and film a peasant is to step into his private life and create relationships of trust over many years. ”

During the 1990s and 2000s, Raymond Depardon traveled through the french countryside with his 6 x 9 photographic large format camera. From this exploration of the rural world, he produced black and white photographs that tell the story of the land, people, of manual work, of the isolation and fragility of small farms, but also the beauty of the French landscapes.

It’s fall, it’s the early 1990s. I bought an old Austrian Pinzgauer truck, a six wheel drive equipped to sleep in the desert.

I decided to take photographs and later make a film about the peasants of the middle mountains.

I went alone to get to know this territory and its inhabitants better, located in deserted regions of France.

I was lucky enough to live my early years on a farm in the Saône valley.

I am not nostalgic for my childhood; even though I had a lot of freedom, I saw that my parents’ work was very hard, far removed from the clichés of country life.

I went to the south of France by the sea and then slowly climbed the first mountainous foothills of the Cévennes while sleeping in my truck.

I wanted to slowly approach these valleys and these plateaus, this Mediterranean hinterland which was already deserted and devastated. […]

I had a few names written on a piece of paper, detailed maps, as if I were going to remote parts of Africa. It was an exciting journey for me.

But I had to be introduced by a neighbor, a mayor or a postman to meet the peasants. It was more difficult than finding Bororos in the Sahel or Chipayas on the Altiplano. You don’t go into a farm without being introduced.

I walked through a hostile landscape where the rare pedestrians I crossed fled my presence.

I rediscovered my country, my culture.

The days went by, I was riding endlessly and I still hadn’t met anyone, not the shadow of an acquaintance or the start of a track to be able to develop a project.

I photographed this great solitude with happiness. I was fascinated by these empty roads and villages. I think it’s one of the best experiences of my life. […]

While driving, I counted how many times I had been told that France had changed, that agriculture was now a modern and profitable profession, while the peasants of my childhood had disappeared. We should only talk about progress so as not to harm the whole of French agriculture.

I could see that these rugged mid-mountain terrain was not suited to the intensive agriculture that was being planned across France.

These men and women who inhabited and persisted in cultivating these desolate lands were sages, philosophers, heroes, ahead of the necessary decline to come. This political and ideological shock was a driving force for my project.

The snow had arrived, the cold too. It was winter, I returned to Paris, then I came back in the spring. I began to photograph the few people I was attracted to, one photo after another, without breaking the harmony that was growing between us.

One day, a farmer said to me: “It’s good to see you again”, and that’s when we started planning the filming of rural Profiles: The Approach. Then it was Profiles small farmers: daily life and we finished with Modern Life.

Today many of these peasants have disappeared. There are still nephews and nieces, but few children have taken over the family farms. In the summer, during the holidays, the villages repopulate for a short time. I love these places, it is a great pleasure for me to go back there regularly to check in.

Born in 1942 in Villefranche-sur-Saône. Lives in Paris. International filmmaker, photographer and journalist, Raymond Depardon occupies a unique place in the field of contemporary image. Co-founder of the Gamma agency in 1967, he joined the Magnum agency in 1978 and produced reportages all over the world until the early 1980s. Subsequently, while keeping a daily practice of photography, he shot documentary films in direct cinema.