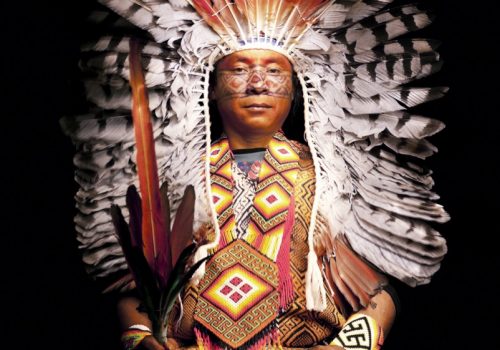 Time, bodies and minds are out of tune. We seek in vain, night and day, paths of reconciliation with ourselves, and with the world that is being devastated.

We seek, but we are not alone. There are those whom the anthropologist Philippe Descola calls “the cosmic mediators”, the shamans, guardians of the keys of the invisible, healers, guides and messengers.

In 2010, Flore-Aël Surun, a member of the Tendance Floue agency, ecountered shamanism, before getting closer in 2016 to the Circle of wisdom of ancestral traditions: each year, to honor the prophecy of the Circle of Nations, shamans of around the world meet in France.

Accepting to be revealed by the moving light of the photographer moving around them, these men and women capable of dialoguing with the 10,000 Spirits, appear in all the power of their mystery, their strangeness, their profound singularity.

Guaranteeing the order of the world and preserving the laws of interactions between the domains of the visible and the invisible, shamans are among the last protectors of a planet and of a humanity that probably never suffered as much in their entirety .

Far from being only a collection of fascinating portraits of these intermediaries from five continents, exercising their rites between life and death, the book designed by Flore-Aël Surun is also the testimony of personal experiences. From her relations with the non-visible, she gives us notebooks inserted in the book.

These spaces are searches for symbolic sacred thresholds, almost pop dazzling, empathic waves emanating from Korean ecstatic dances, discoveries of spontaneous anthropomorphic totems. These are not answers but doors open to the imagination, to our intuitions, because the entities of nature and other worlds like territories where tthey an escape the immediate eyes of human beings.

This book also raises the question of the artist’s function in a sick society, and more specifically the role of the conscious photographer to work on a new ark of alliance.