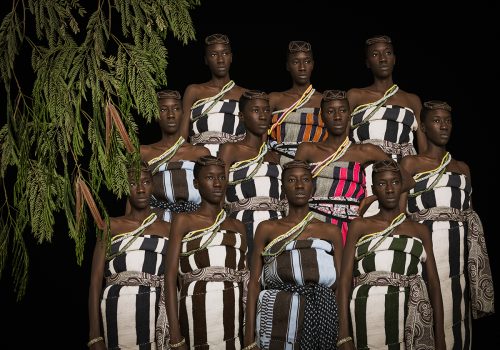 Omar Victor Diop lives and works in Dakar where he was born in 1980.

He uses photography, styling and scenography to transcribe the history, modernity of African societies and their lifestyles.

With a game of visual references mixing self-portraits and staging, Liberty revisits a story that spans several centuries, on a territory often covering several continents and bringing together a collective memory of the black protest.

Liberty’s tone is not that of lament, but rather that of meditation, solemnity and the celebration of the infernal quest for freedom too often flouted.

Identity and discovery, both collectively and personally are the main themes of Omar Victor Diop’s Diaspora project. A journey through time, this photographic series reveals and deepens a rarely told story about the role of Africans outside Africa.

Through this work, Omar Victor Diop forces us to reconsider our conception of history and it provides answers to his perpetual questioning, to his dialogue with himself about his identity as an artist and as a person.

Omar Victor Diop began research for this project during a four-month residency in Spain, in Malaga, where he was in a foreign position. For this first chapter, he focused on Europe from the 15th to the 19th century.

Inspired by the multitude of baroque works of art created at the time, Omar Victor Diop sees this era as marking the beginning of a period

intense (and previously non-existent) interactions between Africa and the rest of the world. Inspired by portraits of notable Africans who have marked European history, he opposes and compares his life course and his heritage to their own, while tracing the unique destinies of travelers and of those in a foreign environment.

For the first time, he stages himself in his art, thus adopting the position of narrator and character at the same time, and forcing himself to face his own doubts directly. It refers to the world of sport, that of football in particular, in order to show the duality of a life of glory and recognition which is also a life spent being “the other”. We find this paradox as well in today’s footballers than in the men depicted in his self-portraits.

Ambitious to broaden his point to Asia, the Americas and the Middle East, Omar Victor Diop hopes that his work can take place in the current debate on immigration and migration, their impacts and the accusations against them. they have to face. He also hopes to be able to change the way in which the stories of Africans discovering the world are perceived.

Here are the new faces of the urban cultures of the continent. They are black, Arab, white, whatever. They are creative and ambitious, but most of all, they work to make their visions a reality. I paint a portrait of a generation that works to position the African urban as a melting pot of contemporary creation, a place of exchange and production.

It is a question here of going beyond the purely representative exercise which wants each portrait to be the “immortalization” of a stupidly dressed-up smile. The approach is collaborative, in the sense that the subject and I assemble clothing and decorative clues bearing

Welcome to this Studio des Vanités. Here, appearing is already a way of being. The vanities that emerge here are playful, optimistic and conquering. They offer the world what it fed them with: a Creole soul.