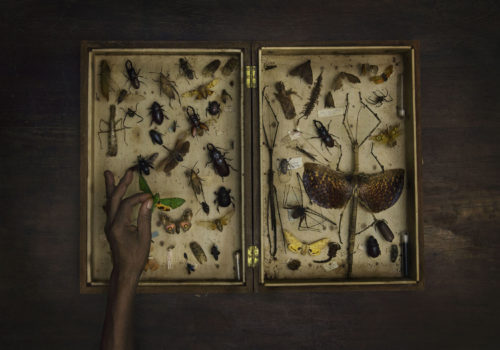 Following the Weather Man, exhibited in 2015 at the In Camera Gallery, Evgenia Arbugaeva is showing Amani, her latest series shot in northeastern Tanzania. In eleven pictures, the Russian photographer documents what, in the twentieth century, was the last malaria research station, and is today a unique place preserved from oblivion by former lab assistants who have kept it alive.

“We tend to romanticize the past, and I love being in this wonderful place between reality and fiction.” Evgenia Arbugaeva thus explains what might well be a constant in her work: the quest for lost time, recovered here and there, which she comes to interpret as if by magic. The series Amani reveals how the artist goes about recreating a certain time and space, at once vast and constricted, without appropriating the territory, but instead striving to share it. The power of suggestion? Perhaps, but it’s more than that: born in 1985 in Tiksi, in eastern Siberia, Evgenia Arbugaeva taps our own imagination to construct a world that is less fictional than it might appear.

The story began in Norway, where anthropologists from the University of Oslo described their work at a colonial-era research lab called the Amani Station, now half-abandoned in the Usambara hills in Tanzania, the land of legendary biodiversity. “I was literally captivated by their study,” recalls Evgenia Arbugaeva. “They were concerned with the memories and dreams associated with this mysterious place, for both the British scientists and the Tanzanians who assisted them. Because they wanted to collaborate with artists, they invited me to participate in their project…”

This was her first visit to Africa. This northerner, raised in the tundra, found herself overwhelmed by nature and the lush vegetation. Deep in this spectacular landscape, she recalls, “the Amani Malaria Station is like an oasis in the middle of a national park, visited by tourists, students, and scientists. Time stands still. Everything is just the way it was left first by the Germans—before the First World War, they had planted a botanic garden and coffee plantations—then by the British who were intent on expanding the activities of the research lab and called on the local population to participate in the experiments, both as subjects and assistants.” Since the late 1970s, after the British had departed, the Amani Station has been looked after by a handful of former assistants and groundskeepers who have protected it against the assault of nature. John Mganga is one of them. He is the protagonist in the photographic series; he embodies the past and symbolizes the present, awaiting the revival of this unusual garden of Eden. Days go by peacefully. Some groundskeepers rest in the shade, others go about their daily tasks: feeding the lab mice, dusting the specimens, opening and closing the library at the designated hours, even if no one comes to visit, besides a few ghosts…

Like Vyacheslav Korotki in the series Weather Man, the Artic meteorologist who read Hemingway, John Mganga shares his dreams with the young Russian photographer. Not too long ago, he caught butterflies and insects for the lab entomological collection. Today, he takes her for a stroll around the German botanic garden, populated with exotic trees planted over a century ago.

When she photographs him, Evgenia Arbugaeva gives her subject complete freedom. She has a gentle touch: John Mganga inhabits his own reality, and she doesn’t try to catch him unawares. The viewer, however, may find the proximity somewhat disconcerting. This universe frozen in time is shown with no special effects or exoticism: nothing has been moved or touched. Evgenia Arbugaeva puts her faith in natural light. Rather than black and white, she prefers touches of ochre, yellow, and green which create such an unsettling impression of sedimented color. The photographs seem dominated by reason and developed with passion, as if refined with brushstrokes.

Brigitte Ollier worked for 30 years as a photography critic for the newspaper Libération and is now an independent writer.