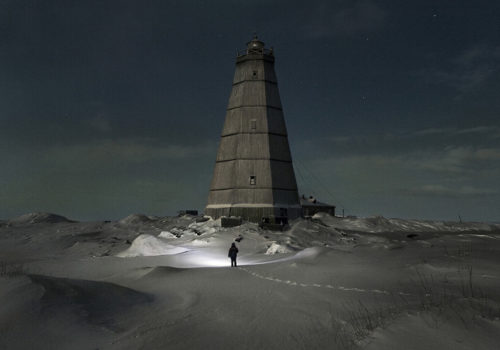 The remote reaches of our planet hold fascination for many. From the comfort of our heated homes we harbour romanticised views of explorers and scientists working in fantastical locations like the Arctic. With the Northern Lights dancing across the sky, endless plains of snow and ice and darkness descending for half the year, nature paints a thrilling canvas that allows the imagination to soar.

Photographer Evgenia Arbugaeva knows this canvas well. She grew up in Tiksi in the Republic of Yakutia, a northern Russian seaport located on the coast of the Laptev Sea. Her father, a breeder of rare Eastern Siberian Huskies, instilled in his children a love of nature and adventure, a spirit that today informs her choices on what to photograph

Yet photography was not an immediate calling. “I wanted to be a painter, but I wasn’t very good,” she laughs as we chat. “I’ve always loved extreme travelling. So after University I travelled for a year with the reindeer herders of a nomadic tribe in my homeland. The Republic of Yakutia is an interesting place and I’m very lucky to have been born there. There are lots of corners and places to explore in my Republic and I really wanted to go and see what’s out there”.

While travelling with the reindeer herders she slowly began to take photographs. As the year progressed the idea of creating a photographic project of this trip began . “It was very intuitive,” she says.

Excited by the storytelling possibilities that photography offered, she enrolled at the International Centre for Photography (ICP) in New York in 2008. “New York was a life changing experience,” she says although this was not her first time in the US. When she was 15 years old she had spent a year in Connecticut as an exchange student. “ICP is a pretty special place. Studying with all the students who were as passionate about photography as me, and with teachers whose work I admired so much and being able to see the shows in New York…Giving all my time to photography, I enjoyed it so much and it started to open up a lot of things for me. Once I was out on my own I began to explore it further”.

Since her graduation in 2009 Evgenia has landed work with National Geographic Magazine and had her photographic stories published in the New Yorker and German magazine Mare amongst others. She’s been successful in gaining grants and sponsorship also.

“I am aware of the difficulties of the photographic industry and I wouldn’t say it is easy for me,  when I was just starting it was extremely hard as it is for many young photographers. At the moment I am lucky to have enough work, but I generate this work myself, I am not an assignment photographer as such. I try to explore my own ideas and do my own projects and then collaborate with magazines . I’ve also been very lucky because the topics I am working on at the moment are interesting for people. We will see what happens in the future, but I have good faith in the photography world.”

Her latest series, Weather Man, fulfills a lifelong fascination with those who work in the remote meteorological stations in the Arctic, yet the story came to her by chance as often is the way.

In the Spring of 2013 (April) Evgenia embarked on a sled dog trek with her father, brother and two of her father’s friends. “This expedition was my father’s dream, something he wanted to do with my brother and me when we were growing up. We travelled across the Arctic Ocean and the New Siberian Islands, which are completely uninhabited. On the trip we passed two meteorological stations with two or three people working there and we  sheltered in one during a big snowstorm. I was really amazed by the people living in the middle of nowhere and I thought there was something to explore there”.

The trip peaked her interest and she wanted to see other weather stations. Evgenia went aboard an icebreaker that travels to all the stations once a year to deliver supplies. It was a two-month journey. “I visited around 20 stations, but I realised I was looking for the stations of my childhood, an era of highly romanticised stories about Arctic explorers and those working in the Arctic…you know men with big beards and sparkling eyes. The stations have changed now, they are more modern, the buildings characterless, meteorologists are younger and many work there for short times. So it was a completely different atmosphere to what I was expecting”.

She continues. “And then we stopped at Khodovarikha station. I was there for about two hours while the ship unloaded. As soon as I met Slava (Vyacheslav Korotki) and saw the station I was fascinated by the place and by him. I knew I had been looking for him and we connected right away. He doesn’t talk a lot, but I could see that we would get along very well. This place is so surreal. In summer it is full of sand and you feel you are inside an hourglass where time has stopped. I went back on the ship, but I couldn’t take this man and place out of my head. I knew I had to come back”.

The only way to return was by helicopter. Evgenia sought sponsorship and Leica Company came on board. She arrived in Khodovarikha on New Year’s Eve 2013 in the heart of the Polar night. “I couldn’t get hold of Slava, the radio didn’t work and he doesn’t have a phone and there’s no way to get a telegram to him, so he didn’t know I was coming! I just landed there with a box of oranges, champagne and a bird,” she breaks off laughing. “I had this idea that he might need a bird, I thought it might be a nice present. When he saw me it was like, oh hi (laughing). He didn’t look surprised. I feel that nothing actually can surprise Slava, he is such a Zen person, so calm. I stayed there for three weeks.” She returned again in September 2014 for another two weeks, this time thanks to a grant from the Photo De Mer Festival who will showcase Weather Man at this year’s festival in April.

Evgenia says she intentionally chose to begin her project in winter. “It is very dark at this time of the year, and this is something very special about Arctic. I wanted to show the feeling of this darkness. This part of Arctic is completely unknown, for many it is a white spot on the map”.

“In my work what I am photographing is real, but I also try to create this special surreal atmosphere to enhance this feeling. That’s why it takes me so long to work on my projects. I worked on this for one year and finally had 14 images. I am not so interested in showing the reality of the place, but little pieces, moments that contribute to this fairytale that I feel when I am there.”

The sense of surrealism also comes with the knowledge that this world Evgenia has captured has now passed: the 1930s station is no longer, replaced by a modern, generic construction. Slava is to retire and return to his hometown of Arkhangelsk, also in northern Russia, near the White Sea.

Over the years Slava has intermittently returned to Arkhangelsk, where his wife lives, but how will he cope living in an inhabited settlement, after so many years spent in isolation? “I talked a lot with him about that,” says Evgenia. “He doesn’t see himself living in a city. He cannot cope with the traffic, he’s afraid of cars, and doesn’t like the fact that he needs to walk only in certain places. He’s used to walking where he wants. He doesn’t understand why everyone is rushing and why people can be so rude, why nobody stops to talk and to say hi. He doesn’t accept this life in the city at all and wonders why people torture themselves!” He plans to return to his parents’ old home situated by a river where he can be at peace with nature.

In conclusion Evgenia says, “When I was leaving after my last trip to Khodovarikha I was standing near the helicopter and I asked Slava why he never asked me anything about myself. I said, aren’t you interested in who I am? And he said ‘I already know who you are. I feel you. You are a northern girl”.