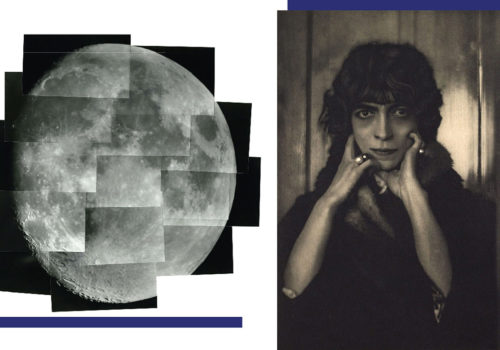 This is the twelfth dialogue of the Ettore Molinario Collection. A dialogue that speaks of the moon and the woman who most of all has been able to interpret every lunar influence, the Marchesa Luisa Casati. A dialogue, which goes into the darkness of space, a frontier in which photography was already immersed in 1840, and into the darkness of other dimensions. And paying homage to the seductive power of the moon, I invite you to follow our next appointments.
Ettore Molinario

She didn’t want to hear about the sun or even see it. And if she could, she would have darkened it even in the sky, so that the day might become a very long night. Throughout her life, a life devoted to the theatre of herself and the show of her inventions, the Marchesa Luisa Casati was a lunar woman, of that lunatic, hypnotic and transformative madness, which diverts the flows and pushes the most courageous beings to explore other dimensions. Even that of the afterlife. The Marchesa loved, and so did Baron Adolph de Meyer, her guest in Venice, at Palazzo Venier dei Leoni, to evoke spirits and question them. Among the most reluctant «to be tracked down and to get out of her silence», Casati admitted, was that of Princess Cristina Belgiojoso, who was said to have kept the hearts of her lovers and even embalmed the body of one of the youngest and most beautiful.

The Marchesa had not dared as much, because in reality she had gone further, dying herself of boredom after each kiss, and even stopping her heartbeat to escape the fusion of the embrace, as Gabriele D’Annunzio, her lover, complained. But then the desire for conquest would rise again, her eyes green as absinthe reopened, and the body craved a new skin, maybe even a new dress, one of those scenography dresses she would wear in grandiose parties, those soul-dresses that on her looked like «the ashes on the coals», as in D’Annunzio’s words.

Casati entered the scene and it was as if the life of others, ordinary even in wealth, was extinguished. And it was extinguished because that stunning, lonely woman carried the mark of lunar death with her. A moon never full, but in fragments, one for each victim, one for each broken heart, one for each portrait that the artists, taken by the enchantment themselves, have dedicated to the Divine Marquise, from Baron de Meyer to Man Ray, from Cecil Beaton to Giovanni Boldini.

Even as she got older, Casati remained faithful to the lunar hours. In her little London flat where she spent her last few years, her curtains were permanently closed and a black veil covered her face. She was far from sad, in spite of the fact that everybody had abandoned her and she was now in misery. «Unhappiness gives off a bad smell» recalled the Marchesa. And after all, when you are a lunar woman you get used to disappearing from the sky and shining again among the clouds.