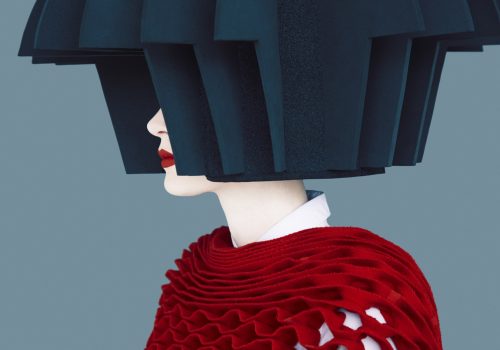 Fashion photography is 100 years old and has followed varied paths since Baron de Meyer and Edward Steichen first photographed fashion. For a time, the only place to see a fashion photograph was in the pages of a magazine, or possibly stuck to the wall of a teenage girl’s bedroom; but things have changed, with museums holding major exhibitions, galleries and auction houses selling prints, and publishers constantly releasing new titles devoted to fashion photography. Iconic images by the likes of Horst P. Horst, Erwin Blumenfeld, Irving Penn, Guy Bourdin, Richard Avedon or Helmut Newton have entered our cultural history, selling for record prices. No longer regarded as frivolous, fashion photography has been elevated to the status of an art form.

American photographer Erik Madigan Heck’s visual language is quite amazing in that sense. In a relatively short career, he has developed a very personal way of looking at fashion. A glance at his book, Old Future – published this year by Thames & Hudson and the subject of an exhibition in Zürich, Switzerland – reveals a clear and distinctive treatment of colours and patterns that form his signature. The series reproduced here was published in April 2017 in the New York Times Magazine. It was Heck’s own idea to produce a fashion portfolio on Comme des Garçons to accompany the launch of Rei Kawakubo’s recent exhibition at the Metropolitan Museum of Art, in a magazine that would normally exclude fashion pages. Again, this is an example of Heck’s unique approach: to work with a non-fashion magazine and focus on Kawakubo’s work – a designer who strives to go beyond fashion and express “abstract images” rather than simply design clothes.

Heck received support from both the New York Times Magazine and Comme des Garçons to photograph six pieces from the Fall 2017 collection. Minimal and pure, the colours in Heck’s photographs resonate with the palette of Rei Kawakubo’s clothes. Called Future of Silhouette, the series pushes fashion photography to a new extent. The white face of model Saskia de Brauw appears here and there on a body slightly out of scale, a body of expanded forms. The history of fashion photography attests that the pendulum has always swung between artificial and natural beauty, yet the obsession with a healthy body – one that is slim, unblemished, and young – has remained. Here, the body takes another direction. For the last 40 years, Kawakubo has been questioning fashion; this collection works with raw material – what Kawakubo calls “nonfabrics”. Heck’s photographs push the concept to new limits, creating imagery that goes beyond traditional fashion photography. Meticulously constructed and enhanced with bright colours, blurring the line between the clothes and the background, his images play with this idea of ‘future’ silhouettes.

Fashion photography is often paradoxical: it is both creative and commercial – produced to order but at the same time generating progressive, experimental, artistic images – whilst representing both haute couture and popular culture. Fashion photography may be regarded as an art form, but it is still an industry that services another (whether high fashion, ready-to-wear, accessories or cosmetics). Photographers, together with fashion designers, produce works which demonstrate that beauty is not a fixed line, but rather one that is in constant flux. Kawakubo also shows how it is an endlessly evolving ideal. This shared obsession with metamorphosis is on vivid display in the photographs Heck created for Comme des Garçons.

Heck collaborates with artists he admires, both in fashion and in art. Kawakubo herself belongs to this group. “When I started researching different brands and their designers – from the most mainstream to the most obscure – I began to see fashion as an art form with its own language, aesthetics and creative possibilities,” he writes in Old Future. He would surely agree that fashion photography is the younger sister of modern art.

In the 20th century, photographers commonly stepped from the art world into fashion. Edward Steichen was, together with Alfred Stieglitz, the founder of the journal Camera Work, playing an active role in New York’s 291 gallery where modern art was first exhibited in the early 1900s; Man Ray and Erwin Blumenfeld were closely connected with Dadaist painters; George Hoyningen-Huene was a student with artists André Lhote and Man Ray; William Klein studied with painters André Lhote and Fernand Léger; Horst P. Horst was an assistant to architect Le Corbusier and worked with Salvador Dali. Heck too says he has always looked to painting as a guide to using colours. Among his influences, he doesn’t name photographers, but painters such as Edouard Vuillard, Edgar Degas, Peter Doig, Marlene Dumas and Gerhard Richter. For Heck, “art is a continuum you are meant to build from.”

Nathalie Herschdorfer is a writer and historian of photography.

Book published by Thames and Hudson
£28