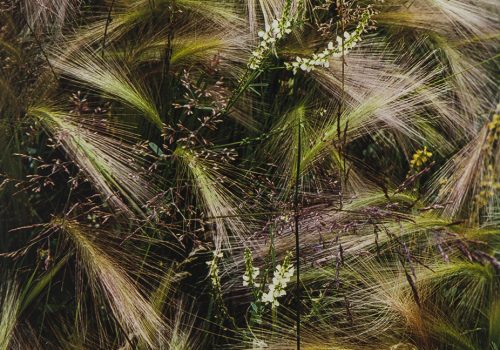 I must thank you for having given me the opportunity to live with your spirit in the form of those photographs that for three weeks were on our walls. Some of your photographs are the first I have ever seen which made me feel ‘there is my own spirit.’1

An expert technician with a vital affinity for his subject matter, Eliot Porter spent his career photographing the minutiae of nature, investigating with each vibrant image “how nature’s apparent disorder can be reduced to aesthetically stimulating fragments” in the belief that “only in fragments of the whole is nature’s order apparent.”2

Born in Winnetka, Illinois, in 1901, Porter developed his interest in photography as a child but did not pursue it professionally until 1939. He initially became a scientist and professor, earning a BS in Chemical Engineering and an MD from Harvard and teaching at the university through the 1930s. He pursued photography throughout, buying a small–format Leica in 1930. Soon after meeting Ansel Adams in 1933, he began using a large–format camera. In 1939, Alfred Stieglitz mounted an exhibition of Porter’s work at An American Place and the following year Porter decided to pursue photography full time.

Always a scientist, Porter’s first major photographic series focused on birds. Feeling limited by the black– and–white nature of photography, he began experimenting with color, learning to make separation negatives and dye transfer prints. His Birds in Color earned him a Guggenheim Fellowship in 1941 (renewed in 1949) and the series was exhibited two years later at MoMA. By the early 1950s, he had abandoned black–and– white photography altogether and become one of the first photographers to work exclusively in color. Porter’s focus, skill, and dedication to color prints helped to usher in a new era in photography; he became known as the father of color photography in the process.

Porter settled with his family in Santa Fe, New Mexico, in 1946, but his photography continued to take him around the world. He sought out the smallest details of the natural world from Maine to California, the Galapagos to Kenya, looking for the “grand truth in the minute”3 in each place he visited. Through the Sierra Club, he published twenty–seven books of his vibrant nature photographs—In Wildness is the Preservation of the World (1962), The Place No One Knew: Glen Canyon on the Colorado (1963), among others— becoming closely associated with the burgeoning conservation movement that was taking root in the United States.

In 1979, the Metropolitan Museum of Art presented Intimate Landscapes, its first exhibition of color photography. This major exhibition of fifty–five of Porter’s images (40 of which make up the current show) was curated by Weston Naef. The Met’s exhibition and catalogue solidified Porter’s reputation as the finest color photographer of the 20th century. Porter’s work ushered in a new era in photography and continues to inspire viewers and photographers to closely examine and reflect on our natural world.