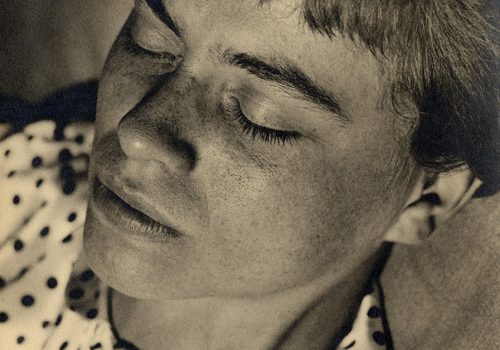 “her interest was directed to man and his environment, symbolised by the reduction of the form to mere identifying features” (1)

On the occasion of the 100th anniversary of BAUHAUS, Gallery Julian Sander presents a selection of photographs by the artist Elfriede Stegemeyer. Under the title “Schule des Sehens” (“School of Seeing”), Stegemeyer’s photographs will be accompanied by the works of some of her companions, who will give insight into her life and work. Elfriede Stegemeyer’s interest in everyday objects, their formative and creative potential, as well as material structures and connections, form the core of her photographic oeuvre. She explored new ways of seeing by, for example, playing with different perspectives or close-up views. During her six-year involvement with the medium of photography Elfriede Stegemeyer developed a remarkable intellectual continuity and artistic expression.

Her preference for the Bauhaus came from the admiration for the work of Herbert Bayer, who taught master-classes at the Bauhaus until 1928. Due to the escalation of the political situation and the associated hostility against the Bauhaus Dessau, she studied Photography at the Staatliche Kunstschule Berlin from c. 1930. In 1932 she followed Otto Coenen to Cologne and began studying at the Kölner Werkschulen. The close contact, but also the intellectual and artistic exchange with the Kölner Progressiven (Cologne Progressives), as well as the study of the magazine a bis z (a to z) had a strong influence on her life and work, revealed her constructivist image concepts and also aroused her joy of experimentation.

The encounter with the photographer Raoul Hausmann in Paris in 1935 was both formative and private. During Stegemeyer’s and Hausmann’s time together in Ibiza, they took pictures of the island, especially of the island’s architecture. Elfriede Stegemeyer was inspired by Hausmann’s interest in regional architecture, and their close collaboration strengthened her sense of ethnological peculiarities. Her attention lay more on the formal and surface language of the buildings, which she juxtaposed with her nature photographs in an almost philosophical way. That brought up their structural similarities in a graphic-artistic way. And reflected her interest in constructivist vision, which stands in contrast to Hausmann’s rather documentary style. This is also evident in later further processed shots of prickly pears, which are assembled into surrealist, constructively inspired montages (o. T. (Kakteen), 1937).

The series of glasses Elfriede Stegemeyer produced between 1934 and 1938 represents an important development in her work. Industrially manufactured everyday objects, which are given a sculptural and often abstract aesthetic by a specific play of light, shadow and perspective, are examples of Stegemeyer’s photographs, as well as pictures like “Orange, 1933”. The leitmotiv of this “still life” is the interplay of space and surface as well as surface structures and a linear background.

The title of this exhibition “Schule des Sehens” not only describes the title of an unpublished book of the series of glasses, but can also be considered a heading for her entire photographic work.