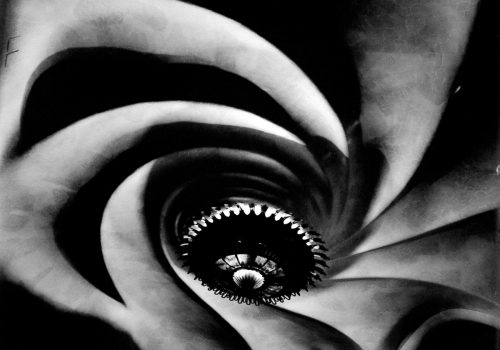 A major figure in Japanese photography, 83 years old Eikoh Hosoe has been able to preserve his prolificacy and his influence. He began his career as an independent photographer in 1954 after leaving the Tokyo College of Photography. He received the special medal at the 150th anniversary of the Royal Photographic Society and is honored in Japan with the title Personal of Cultural Merit., a prize given to the influential personalities of Japanese culture.

His photographic language with an innovative style placed him among the Japanese creative avant-garde, Eikoh Hosoe imposed his style thanks to a quasi-baroque aesthetics where the grain of the image, the compositions and the original contrasts appear reactionary faced to a postwar authoritarian Japanese society.

From 1957 to 1961, he forms with photographers Shomei Tomatsu, Ikko Narahara, Kikuji Kawada, Akira  Sato and Akira Tanno the collective VIVO which created the movement “School of the Image” and deeply influenced the Japanese photographic style of the 60s and the 70s.

Inspired by his peers (Bill Brandt, Ansel Adams, Edward Winston) and best known for his work centered on the body, Hosoe tracked Beauty. This perpetual quest is accomplished in the visual perception of the nudes, theatrical scenes that he elaborates. The body becomes a fixed idea for him, an unthinkable notion in a culture where the nude does not exist. Hosoe’s exploration of the esthetic and contrasting vision of bodies brings us back to a reflection on identity and the inner self.

Hosoe developed a unique language at the crossroads of several art forms, combining photography with theatre, dance, cinema and traditional Japanese art. At the end of the 1950s, he started to achieve a certain notoriety, thanks to his series Man & Woman. By surrounding himself with influential artists, he approached different art forms. For his book Kamaitachi he worked with Tasumi Hijikata, a dancer of butô theatre, and constructed it as a show. For the album Barakei-Killed by Roses he collaborated with the writer Yukio Mishima.

Hosoe’s first contact with Gaudi’s architecture occured in 1964 thanks to the desire of a Barcelonan editor to publish a Spanish version of his book Ba Ra Kei-Ordeal by Roses. Yet, it is only 13 years later, in 1977 that he began to photograph the Park Güell and the Sagrada Familia. He did not however seize at that moment the spirit or the ideology of the creator of these architectures, nor in 1978 during his 3rd shooting, and it is probably for that reason that his work continued until 1984.

Hosoe has never photographed Japanese architecture. He prefers humans as models but with Gaudi, architecture resembles for him bodies with strong sexual potential.

The architectural photographs of Gaudi in Barcelona of which Hosoe feels the zen spirit, found in his book The Cosmos of Gaudi and presented for the first time in France at the Baudoin Lebon gallery, does not step away from this search because his oriented and engaged perspectives resemble the curves of the human body whose depth in chiaroscuro recalls a sound and light.