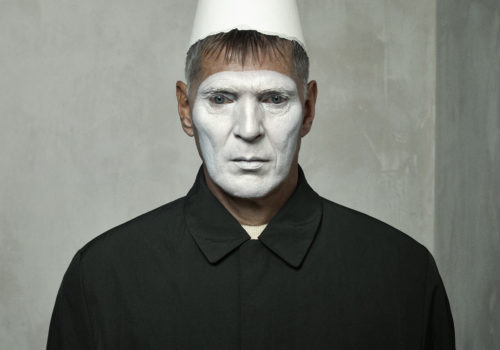 Edwynn Houk Gallery presents Erwin Olaf New Series: April Fool and In the Forest, opening on April 8. The exhibition will be available online through May 22.

A photographer and multimedia artist, Olaf takes as his subject society’s marginalized individuals, including women, people of color, and the LGBTQ+ community, to explore everything from pressing social and political issues to more meditative aspects of human emotion, motivation, and thought. Drawing on the tropes of art history and cinematography, Olaf creates photographs, often using elaborate staging, costumes, and makeup, that toe the line between reality and fiction. Typically capturing his subjects mid-scene, Olaf creates works that convey a sense of mystery, insisting that viewers piece together gestures, glances, symbols, and iconography to consider and question what they see.

The exhibition at Edwynn Houk Gallery will feature works from two new series, Im Wald (In the Forest) and April Fool, that Olaf created over the past year. Inspired by the new reality of the Pandemic, Olaf turned to empty spaces – both natural and manmade – to explore ideas of waiting, transition, isolation, and travel. For his newest series Im Wald, Olaf traveled to the Bavarian and Austrian Alps, marking the first time that he has shot exclusively outside. The resulting body of black and white photographs explores the transient and migratory nature of humans, an impulse that has largely been paused this year.

Drawing on the works of 19th-century romantic painters, Olaf staged poetic scenes against the dramatic backdrop of the mountains and expansive forest. These highly stylized yet deeply intimate portraits offer only a fragment of his subjects’ story and allow Olaf to reflect on the indifferent power of nature, humankind’s arrogance towards the environment, and the enormous consequence of that short-sighted sentiment. Among the works on view will be Am Wasserfall, a re-imagining of the 1885 work ‘Swimming’ by Thomas Eakins. Evoking both the sublime found in nature, often captured by romantics like Eakins, and the vastness of the landscape reminiscent of Ansel Adams, the work features three nude figures at the base of a waterfall. The work reflects on the majesty and indifference of nature, and both the power and the powerlessness of humans in its presence. In Der Schwan, a young girl in a hijab stands holding an umbrella, floating on a swan-shaped boat in the middle of the lake. The photograph is both timeless and distinctly contemporary–the young girl is a tourist on holiday, and the outlandish boat stands out in stark contrast to the stoicism of the mountains blanketed in fog.

April Fool 2020 is a sequence of photographs that unfold over the course of a single morning in the spring of 2020. Overwhelmed by the dramatic impact of the Coronavirus Pandemic, Olaf turned to the now desolate space of the grocery store, creating a body of otherworldly photographs in a once familiar place. Dressed as a modern Pierrot, Olaf cast himself as the protagonist and wandered the empty aisles and parking lot in a white dunce cap and black coat, staging eerie photos whose very subject is the absence of human activity itself. The theatrical compositions allude to a former world of commerce and exchange, vibrancy, and amusement, now still and largely abandoned. With works like 9:55am viewers confront a ravaged grocery store; its shelves empty from panicked buyers. Olaf stares grimly into a presumably empty freezer, while one other lone figure, her face also painted white, shops in the background. The fluorescent lights cast a sickly yellow glow on the floor, emphasizing the uncanniness of this once bustling place.

Erwin Olaf (B. 1959 in Hilversum, The Netherlands) lives and works in Amsterdam, The Netherlands. In 2019 Olaf became a Knight of the Order of the Lion of the Netherlands after 500 works from his oeuvre were added to the collection of the Rijksmuseum. He served as the official portrait artist for the Dutch royal family in 2017, and designed the national side of the euro coins for King Willem-Alexander in 2013. He has been awarded the Netherlands’ prestigious Johannes Vermeer Award, as well as Photographer of the Year at the International Color Awards. Olaf has exhibited worldwide, including at Centro de Arte Contemporáneo de Málaga, Málaga, Spain; Museu da Imagem e do Som, São Paulo, Brazil; Martin-Gropius-Bau, Berlin, Germany; Southeastern Center for Contemporary Art, Winston-Salem, North Carolina, USA; Museo de Arte Contemporáneo, Santiago, Chile; Kunstmuseum The Hague and The Hague Museum of Photography, the Netherlands; the Shanghai Center of Photography, Shanghai; and the Rijkmuseum of Amsterdam.

Erwin Olaf : April Fool and In the Forest