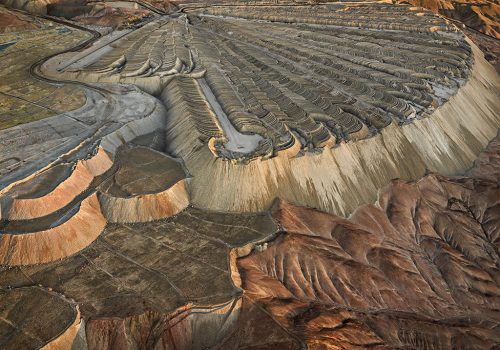 Flowers Gallery presents an exhibition of new work by Edward Burtynsky. These works, created in collaboration with Jennifer Baichwal and Nicholas de Pencier, stem from the artist’s Anthropocene Project, a multidisciplinary investigation into human impact on the planet. The Anthropocene Project debuts this fall with simultaneous museum exhibitions at the Art Gallery of Ontario and the National Gallery of Canada, a feature-length documentary film, and a book.

The works on view demonstrate what Burtynsky calls the “indelible human signature” on the planet, caused by incursions into the landscape on an industrial scale. Chronicling the major themes of terraforming and extraction, urbanisation and deforestation, Burtynsky conveys the unsettling reality of sweeping resource depletion and extinction.

In these photographs, taken from both aerial and subterranean perspectives, and presented at a large scale, the patterns and scars of human-altered landscapes appear to form an abstracted painterly language. From the graduating tonal grids of turquoise and green-gold formed by the expansive lithium extraction ponds on the salt flats of the Atacama desert, to psychedelic fossil-like whorls formed by anthroturbation (human tunnelling) within the potash mines in Russia’s Ural Mountains, they reference the sublime and often surreal qualities of human mark-making.

Carrara Marble Quarries #2, shown in the exhibition as a large-scale wall mural, is taken from a frontal perspective of one of the most renowned marble quarries in Carrara, Italy. The mural, measuring more than six metres long, is comprised of 122 exposures, capturing the magnitude of its cubed architecture with exceptionally high-resolution detail. In contrast, Pengah Wall #2 is an image of a coral reef roughly 60 feet deep, photographed in Komodo National Park, Indonesia, an area spectacularly rich in biodiversity. Captured underwater with a team of ten divers and composited from 160 high-resolution images, measuring a total of 200 square feet (precisely the size of the photographed area), this pristine all-over kaleidoscopic constellation offers a poignant counterpoint to images of the altered environment.

Also on view is a photogrammetric augmented reality (AR) installation, extending the scope of the documentary image into three dimensions. In the installation, visitors are invited to explore the artwork using a tablet, virtually recreating the three dimensional scene within the exhibition space.

As part of the wider multidisciplinary project, Anthropocene is a new book by Edward Burtynsky, Jennifer Baichwal and Nicholas de Pencier, to be published in September 2018 by Steidl. Containing specially commissioned poems by Margaret Atwood published for the first time, a statement by each of the artists and a range of essays, Anthropocene presents compelling artistic and scientific responses to the urgent topic of humanity’s profound and lasting changes on the planet. The Anthropocene Project runs simultaneously at the Art Gallery of Ontario in Toronto and the National Gallery of Canada in Ottawa from September 2018 to early 2019.