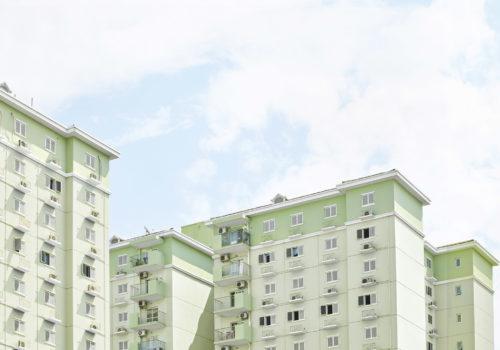 Synonymous with the art of travel since 1854, Louis Vuitton continues to add titles to its “Fashion Eye” collection. Each book evokes a city, a region or a country, seen through the eyes of a photographer. Kilamba by photographer Laura Bonnefous brilliantly shows an Angolan dormitory town with architecture as colorful as it is confusing.

The essence of an editorial collection is to be on the long term. Without the string of opuses added to one another, a collection of books does not take shape, does not register in the eye of the reader, does not write its history, does not hold anything only an aborted initiative. And it must be rooted in an immediately recognizable graphic design, like the white covers of the NRF, as much as to elect its own pantheon.

The collection of photographic books published by Editions Vuitton, entitled “Fashion Eye”, has been distinguished since its inception by its uniform format with colored covers,  images inviting to travel and an interior booklet largely devoted to the work of the photographer, enlightened if necessary by a biography, an interview with the editor and, sometimes, a list of works.

The uniformity of a collection and its graphic and editorial rules force originality. The more the framework restricts, the more the imagination overflows, the oulipian golden rule of the creation. From one title to another, the story is never the same. Until Laure Bonnefous’ opus, “Fashion Eye” had invited us to travel the Silk Roads, evoked the summer dreams of the coasts, told of the tumult of cities or the heaviness of forgotten capitals. With the first idea, admitted or unconscious, to open the reading to always more diverse journeys.

But there are lands that are out of the ordinary, landscapes unknown to travel agencies, imaginary worlds that are distorted or more simply functional, that simply provoke curiosity. Isn’t that the main idea of a book? To turn the pages to find the continuation. Even more so if it intertwines a place, its beauty and its strangeness.

Kilamba is a hard-boiled fiction, a mirage like a functional incongruity born of Chinese capitalism and the promises of an Angolan president. Let us see the illusion before the realism. Laura Bonnefous’ entire book provokes one of the most successful ones, focusing on the shape, color and architecture of this city located 30 kilometers south of the country’s capital, Luanda.

Laura Bonnefous’ Kilamba is a symphony in four parts, marked in the making by four tinted papers, and punctuated by flights of color, high pastel notes. To put it simply, or to confess wholeheartedly, this is a book admirable for its color. It is a spectacular mastery of a range narrowed around five major colors, the “green, yellow, blue, orange and a soft dusty lilac” according to the artist.

These colors are approached head-on, one after the other, and the composition of the photographs in each part plays around simple themes: buildings, walls, balconies, inhabitants, faces and bodies at odds with their colored environments. Color is at once pattern, texture and background. It is omnipresent and yet of an immense softness. One would readily attribute to it, from yellow to blue, gaiety or sensuality, if one did not know after Michel Pastoureau how much its interpretation varies from one civilization to another.

The very presence of these five colors in Kilamba is also an enigma. “It’s not clear why these particular hues were selected, but one thing is certain: these pastel shades are not commonly seen in the country”. First clue! This country is not present in anything, except the ochre earth … and still.

Kilamba is a counter-utopia, a cold architectural and urban principle. It is about the need for large-scale housing that grips developing societies. Laure Bonnefous tells us: “This city was built by a Chinese state-owned company – the China International Trust and Investment Corporation (CITIC) – for the sum of 3.5 billion dollars”, in exchange for priority access to oil. [The new town of Kilamba was built in less than four years, where there was nothing, and was inaugurated in 2012. A dormitory town with 200,000 beds, modelled on the urbanization models of the 1930s and 1950s in Europe, and which is only occupied at one third of its capacity. An unreasonable city that contrasts with the “small villages with individual houses and low architecture” of the country.

In this capitalist delirium, however, Laura Bonnefous finds a form of beauty, which she organizes into “abstract paintings” – a term used advisedly. In the whole series, and even when the presence of certain inhabitants asserts itself in the compositions, there is an omnipresence of color, of its depth, of its own existence. The artist’s use of color is reminiscent of Saul Leiter’s near-abstractions and his Painted Nudes paintings, Irma Blank’s colored writings, as well as Giorgio Griffa’s pastel variations on thin and fragile parchment.

But do we always need to build bridges in a criticism as admiring as cheerful? Oh no, sometimes the journey is enough for itself, and it says all the illusion of the art. Kilamba is perhaps like a Potemkin village, Angolan style, or Chinese style. And if the “people in Kilamba live in the city accepting it as it is. With a slightly fatalistic attitude”, her book is like a waking dream, where the colors are enough to tell a silent and yet chatty story.