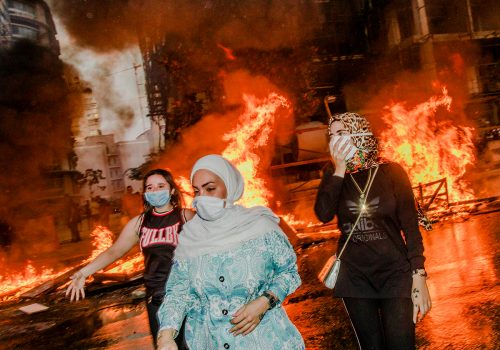 Le Liban n’a pas d’âge is a collective work on the occasion of the centenary of their nation. But more than the celebration of a centenary, this book brings together memory as much as current events, political as well as private moments, hope and disenchantment.

Four parts make up this book: to the effervescent text by Sabyl Ghoussoub “Lebanon has no age” – which will give its title to the book – succeeds a moving sequence of photographic archives that Georges Boustany, collector, has chosen to evoke “The crossing of the century”. Then come the contributions, in images and texts, of a whole generation of photographers of which Tarek Nahas, also a collector, recalls the extreme wealth.

“Lebanon has no age” testifies to the creative effervescence of the Lebanese, who did not lay down their goals despite fear, despair and precariousness. An essential book in these dark times that hit this devastated century-old country.

“To simply express what must be said, to let see what must be seen. Without concealment and with astonishing energy, these artists, authors and photographers at the same time, deposit, over the pages, their country, a country that they never stop loving and rejecting. They had the difficult choice of selecting three photos, from yesterday and today, as close as possible to their reality, lived, retouched, fantasized and describe the circumstances in which they operated.

The Ageless Lebanon pays homage to the spirit of resistance that inspires artistic creation in a country ravaged by all kinds of evils and that nothing seems to discourage.

This country does not need a centenary to grow or exist in the eyes of the world. From its creation in the darkest corners of its history to the tragedy that grips it, its people continue to teach us a lesson in life. The authors and photographers of Lebanon are ageless, they have never given up on the field, we owe them this book. ”

Coordinator of the book and general manager of Bernard Chauveau Édition

Sylvie Andreu, coordinator of the book