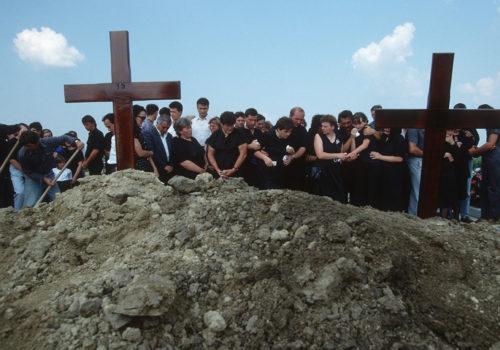 Alexandra Boulat, daughter of Pierre Boulat, the only French photographer of Life magazine, followed in the footsteps of this prestigious heritage and was one of the most committed photographers of her generation, particularly in the Balkan war. She also founded with six great reporters the agency “VII” in which she was the only woman. She had begun her desire for expression through painting but after a long stay in Japan, the demon of the still image took over and she became a photographer for the SIPA photo agency. She travelled the world, Iran, Iraq, Afghanistan, the war in Bosnia, she was on all the fronts of the news. Fate will accidentally mow her down in Palestine in Rhamallah, a terrible echo to Gerda Taro during the battle of Madrid in 1939. Her disappearance coincides with the decline of Photojournalism, magazines no longer being able to insure the cost and the risks of these special envoys who, at the risk of their lives, open our eyes to the horrors and conflicts around the world.

Alexandra left us a dark and poignant work. Her niece, Lucie Saada curated this exhibition with which she wanted to pay tribute to Alexandra’s work “Her photographs in Yugoslavia summarize, in my eyes, all the injustice of a war. The consequences of a war are concrete and its first victims are men. Sandra has always managed to reflect this, the humanity of a war, its concrete value precisely. This exhibition pays tribute to civilians, to these men and women suddenly taken short by violence. It also pays tribute to journalists, I believe in the importance of information. Without them, without their courage and their desire to show the truth in the world, we could not confront ourselves so much with the joys and to the violence of what surrounds us.