Douglas Ljungkvist : Where Coal was King 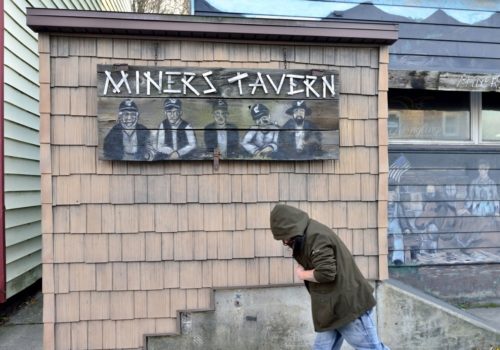 Where Coal was King is the latest project of Douglas Ljungkvist. It is an urban landscape project about towns that were built and thrived thanks to anthracite coal mining in PA, and where they are today, decades after most of the mines have closed. The following is Ljungkvist’s work statement.

Anthracite coal from Eastern Pennsylvania helped fuel the steel mills in the Western part of the state, and the industrial revolution after the civil war. Towns sprung up, in the valleys of tree covered hills, which thrived through the first half of the 20th century. Church steeples are never far away. Many expressive in color and form representing the large European immigration looking for industrial work.

Prosperity led to reinvestment and other industries grew with it; transportation, breweries, and textile factories. People could walk to work in the coal mines and shopped in mom and pop stores on Main Street. Workers were exploited and blood shed to get improved working conditions and wages, thanks to unions.

This project looks at the state of these places, decades after coal mining has closed, thanks to cheaper energy alternatives. Some which are better for the environment. As an urban landscape photographer I’m drawn to prewar main streets, Small-town USA, and (American working class) history. Some towns have houses on the national register of historic places, others have urban blight to the point where houses eventually collapse. It’s a common rust belt equation; Globalization + Automation + Urbanization = Depopulation = lower tax revenue = poverty = urban blight = drugs = crime. In many places, the ones that could have, have moved out, after gangs have moved in. Here they draw less attention than in Philadelphia, New York, or Newark, due to budget constraints.

Sidewalks are mostly frequented by what appears to be the disenfranchised, and seldom women, children/teens or minorities. Even the most urban of these places are car bound, where 5% walk to work and 85% drive, alone. Of the three main counties I’m documenting, the lowest percentage of white residents is 96.2S%!

In the Covid era there are still plenty of Trump signs around despite losing the national election two years ago, including post-election “Trump Won” flags. Joe Biden narrowly flipped Pennsylvania back to the Democrats. But the coal mining counties voted heavily for Trump (around 70%), despite not bringing coal mining jobs back, as promised. This despite Joe Biden is from just up the road, Scranton PA, the heart of the anthracite coal mining industry.

Now mountains of waste from the coal mining days, called culm heaps or slag piles, dots the landscape. Slowly nature start to reclaim the areas and the white birch trees are first to lay down roots. Some of the former mines have smoldering fires, like the one that’s been burning since 1962, and made Centralia into a ghost town after the state forced evacuation and even canceled the zip code. ATV riders are enjoying the manmade mountains creating mysterious looking tracks in the landscape.

People are not used to strangers visiting and photographing there. Mostly I’m ignored but at times approached with suspicion. Portraits of hometown war hero’s with their names are hung on flags from utility poles in many towns, like ghosts refusing to leave.

There are similarities to my urban work and process here, looking for scenes that are free of (modern) cars, people, and trees. The architecture is important, not individually, but as part of a larger landscape.
Douglas Ljungkvist
www.DouglasLjungkvist.com