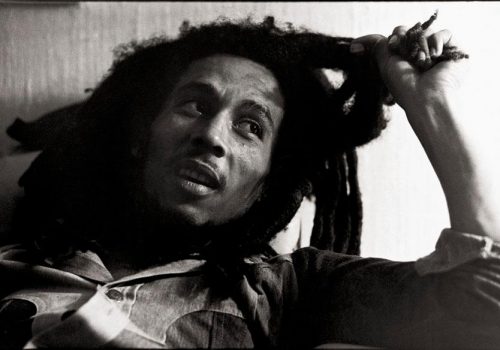 Legendary photojournalist David Burnett, in the mid 70’s, turned his camera to a young musician named Bob Marley.  Bob Marley had started an industry revolution and was bringing attention to his Jamaican homeland and the Rastafarian culture. This was a phenomenon that has had a profound influence on music since.

“Our assignment was about reggae, and Bob Marley was the man,” writes David Burnett. “I was on assignment for Time Magazine to go to Jamaica and visually capture the roots of reggae”. Burnett rejoined Marley in 1977, this trip with Rolling Stone Magazine, to photograph Bob Marley and Wailers for the Exodus tour thru Europe. Capturing the legend at an exceptional moment in time, Burnett’s work intersects with both the zenith of Marley’s career and the traumatic upheaval of Bob Marley’s flight from Jamaica after an attempt on his life.

As for any reggae lover or music history buff, David Burnett offers a matchless glimpse into the Bob Marley life at home in Jamaica. David Burnetts’s photographs take us to the soul of Bob Marley, Jamaica and its people.

This exhibition is presented by Intaglio Blockchain. Intaglio’s groundbreaking technology provides artists, museums, dealers collectors and auction houses with a trusted network of blockchains to record authenticity and provenance. Blockchain technology increases trust by its immutable, date and time stamped ledger-type technology, where records are public and information is transparent. All information placed on the Intaglio blockchain is recorded by a verified, certified entity.  Blockchain technology can do what no other technology has been able to do for art and photography: provide immutable, trustworthy provenance.  Objects are enriched with links to historic, cultural and academic information by sourcing data from the Getty Museum and the Library of Congress.

All 35 works presented by David Burnett in Bob Marley: Soul Rebel are recorded on an Intaglio Blockchain.

David Burnett is a Legendary photojournalist, known for his work covering world leaders, international conflicts, and Olympic medalists.  Traveling to more than seventy-five countries, Burnett has produced photographic essays for Time, Life, Fortune, The New Yorker, The New York Times Sunday Magazine, and many others. His awards include Magazine Photographer of the Year from the Pictures of the Year Competition, the World Press Photo of the Year, and the Robert Capa Award from the Overseas Press Club, to name but a few. David launched his photographic career as an intern at Time magazine in 1967. From 1970 to 1972, he covered the Vietnam War as a staff photographer for Life magazine. In 1975, he co-founded Contact Press Images in New York.