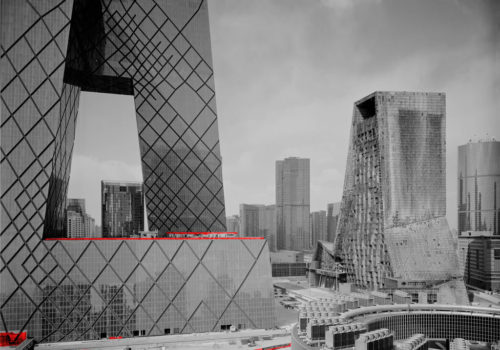 Born in 1965 in Nanjing Province, Jun Zhou is a fine art photographer who has spent the last few years documenting important buildings in construction for his photographic series, City and Construction, an expressive response to experiencing his fast changing environment.

I was taken by Jun Zhou’s gentle and modest demeanor when he arrived at my studio for his interview. He strives at creating a life free of complexity, preferring to take public transportation, living with basic necessities for himself and his family, and he’s not caught up by the extraneous. This direction of Zen-like simplicity could very well explain why his City and Construction series projects a clear, no-fuss story of urban growth through the many buildings he documented in Beijing and Shanghai. However, complexity lies in the multiple meanings behind the images and his symbolic use of the color red.

How did you get involved with photography?

Jun Zhou: My father was a photographer so I became interested in photography at a very young age. He worked in a car-manufacturing factory and was in charge of photography. He shot products and special guest visits; the images were used for press and marketing.

At the age of 15, I started to learn photography from my father. At that time, I was admitted into high school, but decided to take night classes in order to learn by working with him at the factory. I then continued my studies in photography at Nanjing Normal University.

Jun Zhou: City and Construction is an expression of my thoughts on society today. Everything in China is developing very fast. There are many buildings and numerous construction workers everywhere you go. And where there are buildings in construction, there are also different types of scaffolding built around different sections of the building. I was intrigued by the scaffolding and their symbolic meaning.

The scaffolding has two basic functions. It is used for protection. And it provides the viewer on the outside with an aesthetically cleaned up look. Chinese society is currently an incomplete building, experiencing changes and new influences both domestic and global. Society also has scaffolding that conceals some activities. There are a lot of new elements added to society with new policies as it experiences constant change and continual growth.

Why did you decide to use red in your black and white photos?

Jun Zhou: In 2005, I went to Beijing as a visiting artist at Red Gate Gallery. And when I crossed the Xinhua gate, the workers were restoring it by painting it red. This affected the direction of the project.

In China, red has multiple meanings, both positive and negative. My intention is for the viewers to focus on this contrast.
For my generation especially, red symbolizes Chairman Mao and the revolution. And there’s a distinctive emotional attachment to it. When people get married, it’s a festive color. When a child is born, the child’s parents hand out a red egg to their neighbors symbolizing a new birth.

On the other hand, a name marked in red in legal papers indicates that the person has passed away. In addition, red on the roads through lights and signage means warning or danger.
There’s also a dichotomy with architecture in China. The buildings can represent the spectacular and rich economic development. However, do the buildings have a right to be there, and are they being built to last? After 5 or 10 years, many buildings are considered old and are destroyed so new ones can be created.

How did you decide which buildings to capture?

Jun Zhou: I first chose well-known buildings. I also took public transportation, walked around, and observed the city looking at buildings that would be good for the project.

What are your future plans?

Jun Zhou: I will continue adding to this series for the next 2-3 years. I’d like to include the refurbished TVCC building that’s a part of CCTV. I’m also working with the ceramic medium creating sculptures translating formal mural paintings from 2-dimension into 3-dimension.

This interview was conducted and edited by CYJO
[email protected]