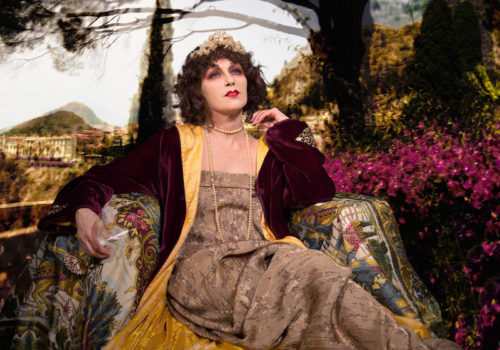 Metro Pictures presents the new photography of Cindy Sherman, who had been lying low since her exhibition at New York’s Museum of Modern Art in 2012.  As is her custom, the artist put on makeup and disguised and staged herself; she was inspired by the portraits of aging Hollywood actresses.  The reference to the stars of silent cinema, forgotten after the arrival of talking cinema, takes the form of an homage to these women, tormented by the passing of their youth and glory and being replaced by a new generation.  Cindy Sherman willingly plays with a certain anachronism between their portraits from the 1950s and 1960s and the particular codes during their golden years between wars.  These images move the glamour aesthetic into an outdated atmosphere: stiff and rigid poses, a look gazing far into the distance, expressions frozen in makeup.  The lighting is sometimes dramatic and theatrical, and the decor, retouched with Photoshop, gives to the whole a strange vibration.  The photographs are large format, created with a new technology of printing directly onto metal which allows one to forgo antireflective glass.  Their quality is remarkable and, when approached, lets one see the imperfections and uncertain craftsmanship of the clothing and accessories, the aged hands of these women who are unsure of where to pose.

In an interview with the New York Times on April 21, 2016, Cindy Sherman wondered to herself, not without sarcasm and with complete lucidity, “This is the last time I do this. I’m so sick of using myself, how much more can I try to change myself?”  It is a legitimate question and so it is for the viewer who keeps in mind her old series, but the artist shows in these new photographs a fear of continuously dwelling on the same thing and repetition.  It is in this worry that they take another dimension, and that is the beauty of it.  It is always difficult to evaluate the new works of major photographers in regard to their past work.  We waited to see some “Cindy Shermans”, but we have finally gotten a glimpse of something more.  These images are not only slightly baroque stagings.  They are like real self-portraits, distorted but authentic.  The photographer accepted without reserve, “It’s the most sincere thing I can do.”