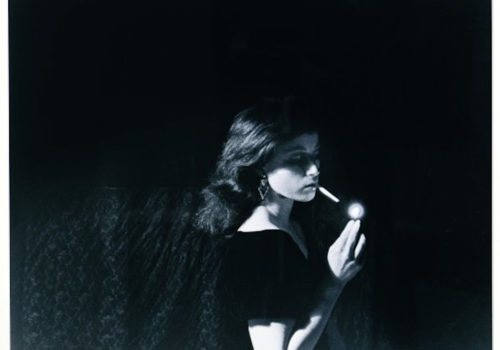 Woman as madman. As the grotesque. The primal and primitive underbelly that society erases all but the most glaring trace. She who is disturbed is disturbing for her lack of feminine grace. She who reminds us of Kali, the Hindu goddess of destruction, of Medea, of Medusa, of gorgons and monsters of yore. The archetype of a woman who will destroy rather than create, who unleashes demons into this world like Pandora opening her box, this is but one of the many archetypes of the female that Cindy Sherman offers us.

Never one to shy from the discomfort that the unpretty reveals, Cindy Sherman’s work can be as revolting as it is beautiful. In Cindy Sherman: Untitled Horrors (Hatje Cantz) we are witness to the darkness that lies beneath, a darkness that is menacing as it creeps and crawls out of its resting place to reveal itself. The book is the catalogue for a show of the same name at Moderna Museeet, Stockholm; Astrup Fearnley Museet in Oslo; and Kunsthaus Zurich in Switzerland.

Dispersed throughout the book are a series of essays by seminal contemporary authors including Kathy Acker, Sibylle Berg, Miranda July, Karl Ove Knausgard, Lars Norén, Sjón, and Sara Stridsberg. The essays provide a linguistic complement to the visual form, giving us an aesthetic response to Sherman’s catalogue of horrors. As Stridsberg notes, mellifluously, “Cindy Sherman’s pictures have a similarly unsettling effect on me, they break  over me like a storm, she slits something open in front of me and within me, something I cannot face encountering; she upends the roots of the beautiful trees in the forests and bares their crawling undersides: roots, earth, insects, darkness. She massacres, she maims, she tears to bits.”

It is those bits of flesh that Sherman offers here in a collection of photographs that are as painful to look at as they are brilliantly composed. Sherman’s understanding of brutality comes with her genius for suggestion, for giving us a screen upon which to cast our fears, assumptions, and aspersions of the dark side of the female form. The captions resist our attempts to find a space in which to enter the work as they are all from her series of Untitled works, thus defying our need for a context, for a direction, for guidance and advisement from the creator herself. Instead Sherman gives us only what we see, the horror of woman as a kind of mythological beast.

The free flowing prose of Lars Norén complements the images, creating a literary context by which we may begin to interpret, or explore, the impact of Sherman’s images upon our mind, body, and soul, a feeling that is without words yet cries out for articulation. As Norén writes, “The narcissism The False feelings The need for feels may be genuine That is all it need to be The moment you forget the crippling grief and can see without identity how exactly your years fall How surprisingly The self-absorbed pose fraught with echoes of earlier works The gaze that does not see . Everything that does not tell The last one of course not the last emptiness in our forgetting of being Images that confirm and contain the forgetting of being”

For it is this forgetting that Sherman defies, that she resists and refuses to remove from our eyes. Untitled Horrors is very much this: scenes from a nightmare that never ends. It is a reality in the life of woman that few men shall ever know, but all women understand, if only as subtext for something else, for a kind of darkness that is revealed in the cracks of a flawless surface, a surface that is as smooth and resplendent of the beauty we dream. Sherman’s horror reflects our own, reflect the unsaid, the unspoken the screams that never escape our lips, the echoes drowning in the abyss.