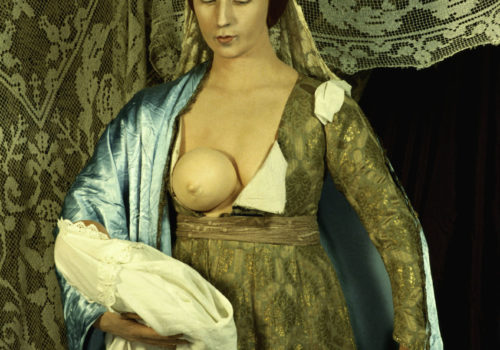 To mark the opening of the stunning Cindy Sherman retrospective at the MoMA this season, we spoke with the exhibition’s curator, Eva Respini. She took us through this unique contemporary photographer’s method and influences.

At first sight, Cindy Sherman’s photographs look like self-portraits, but you write that they are not.

Eva Respini: Cindy Sherman is her own model. She’s her own photographer, make-up artist, hairstylist and costume designer. She works alone in her studio without an assistant. But her photographs aren’t self-portraits. They’re characters that she’s invented, and there isn’t a single case where they comment on Sherman herself or her own personality. It’s more a question of the nature of identity. The characters are familiar archetypes, people we might have seen in a film or painting.

What is her approach to photography?

E.R.: Her approach is a reflection of the nature of representation, how today one’s identity is largely manufactured through the medium of photography. She’s also interested in popular culture, in cinema, the Internet, magazines, fashion, and the way in which the images surrounding us influence the nature of our identity. And photography is a large part of this phenomenon.

E.R.: A few of the photographs critique the woman-as-object, but not all of them. The beauty of Sherman’s photographs is that they’re all untitled, letting each viewer see a different story. In a few cases, the figures seem to draw from a sexual stereotype, but not all of her characters are women. They depict of the different roles of women in our society: the bombshell, the diva, the perfect housewife, etc.

Is it that the woman in Cindy Sherman’s work is losing her identity faced with the pressures of society?

E.R.: Perhaps in some of her work, but her characters are moreover a reflection on our current cultural moment, and how the pressures of society form us. Her 2008 series Society Portraits is a reflection on a society obsessed with youth and status, a society that aspires to wealth. We can observe this in her photographs through the make-up, clothes, earrings and hairstyles. All the elements are presented with an extreme care so that the viewer will recognize them in contemporary culture.

According to Cindy Sherman, what would be a better image of women in our society?

E.R.: In Society Portraits, the woman appears as a tragic and vulgar figure, but Sherman always develops a feeling of empathy for her characters. Her work is complex because it can be a critique and a parody at the same time. Despite the conventions of beauty that it critiques, it is also a recognition of women’s taste for the codes of beauty, clothing, fashion, and looking at oneself in the mirror.

So what kind of woman is Cindy Sherman?

E.R.: Despite her success, she’s a very modest woman, even timid. She loves fashion and shopping like many women. She works intuitively, and is conscious of her participation in visual culture.

We keep coming back to the word “fashion.” Can we think of Cindy Sherman as a photographer equally inspired by contemporary art photography and fashion photography?

E.R.: Certainly. In fact, she’s worked as a fashion photographer since the 1980s, with projects for Vogue, Harper’s Bazaar and several fashion houses. Really, there’s no difference between her artistic and commercial work. The commercial pictures she takes are a sort of anti-fashion photography. Her models aren’t flawless. They have strange looks on their faces and wear unflattering clothes. It’s interesting to see how Cindy is both part of this culture and critical of it. Clients like Balenciaga, who commissioned a project from Cindy in 2007, know what they’re in for. They want to associate themselves with the avant-garde.

Cindy Sherman refuses to qualify her work as feminist. What do you think?

E.R.: I think her work can absolutely be seen from a feminist perspective. She considers herself a feminist, but not her work. Her pictures approach feminist questions while making reference to the grotesque, to poverty and the body. Whether consciously or not, they take part in the debates that feminists have held since the 1960s.

Why is she considered a pioneer in the history of photography?

E.R.: For several reasons. When Cindy was first emerging in the 1970s, especially with her revolutionary series Film Stills, photography and contemporary art were very distinct. Along with other artists, she brought photography into discussions of contemporary art. Unlike other masters of modern photography like Adams and Weston, she was less concerned with questions of technique and printing, focussing instead on the ideas in the photographs. These ideas became very important because they concerned not just photography but art in general. The ways that she approaches representation, artifice and fiction, and how she manipulates her images, are also very important. She entered our collective imagination by recalling the worlds of Antonioni and Hitchcock. By revealing the new abilities of narrative photography, she influenced artists like Jeff Wall and Andreas Gursky.

What can we expect from Cindy Sherman next?

E.R.: We can already see her recent Photographic Murals (2010), making its North American premier at the MoMA. It shows her new approach to photography, which is to go beyond the medium’s framework. Another series opening in April at Metro Pictures will show her new techniques to alter her face. Before, she used make-up, but now she’s making use of Photoshop to modify the curves of her nose and lips and add other effects. She’s taking advantage of the new tools that technology has to offer, and I’m eager to see where that will take her.

This exchange has been back-translated into English from the French.