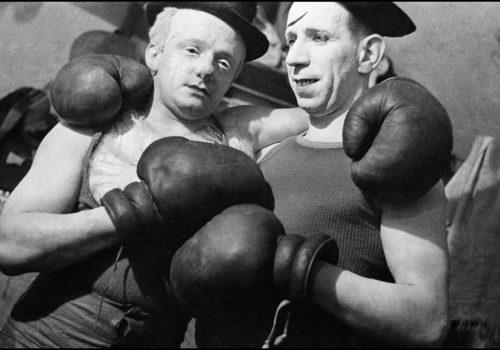 “Chim used his camera the way a doctor takes his stethoscope out of his bag, applying his diagnosis to the condition of the heart; his own was vulnerable.”  – Henri Cartier-Bresson

The life of Dawid Szymin – Chim, as he liked to be called– follows an extraordinary trajectory. From struggling student in Paris to world-leading legendary photographer, his partnership with Robert Capa, Henri Cartier-Bresson, and George Rodger led to the founding of Magnum Photos. One of Magnum’s strengths was the diverse personalities of the founders whose bold vision and camaraderie drew in other high-profile photographers. Their high-impact photos, colorful lives, troubled romances, and tragic endings continue to inspire young photographers, with the stories of commitment to meaningful causes.

The Warsaw-born, Jewish son of a prominent Yiddish and Hebrew publisher was supposed to follow into his father’s footsteps, but instead the vagaries of history pushed him other directions entirely, so that in the end his life recalls the trajectory of many other artists, many of them Jewish, who had to reinvent themselves in exile during the 1930s.

Weaving his life and work, this book takes the reader through the different phases of Chim’s life: his youth in Poland, his studies at the Book Design school in Leipzig and at the Sorbonne; his beginnings covering social life in Paris and the Front Populaire, demonstrations and strikes of the 1930s for the illustrated magazines Vu and Regards; the Spanish Civil War, where he worked as a special correspondent for Regards and persuaded them to hire Robert Capa and Gerda Taro; his 1939 sea crossing to Mexico on the SS Sinai with 1,600 Spanish Republicans in exile; his life in exile in New York, working for the Leco labs; his war work as a photography interpreter in Medmenham, Great Britain ; his post-war work in Europe, especially his renowned 1948 series for UNESCO on Children of Europe showing war-traumatized children in five European countries; his 1950s work in Italy on illiteracy and on religious festivals; his coverage of celebrities such as Pablo Picasso, Yul Brenner, Ingrid Bergman, Audrey Hepburn, Sophia Loren, Gina Lollobrigida, and Kirk Douglas ; politicians- Franklin and Eleanor Roosevelt, Winston Churchill- writers such as Bernard Berenson and Carlo Levi, singers such as Maria Callas, and musicians, notably Arturo Toscanini. His reportage on the Vatican, and his work in Israel; and finally, his engagement in the Sinai 1956 war, leading to his tragic death in November 1956, along with Paris-Match’s Jean Roy, three days after the cease-fire.

Born in Warsaw into a cultured community of Yiddish and Polish speakers, Chim was attached to his Jewish roots, to the specificity of his family’s milieu and to their craft of bookmaking and publishing. In World War I, when his family had to immigrate to Russia, he made as a child the first of his many linguistic passages from Yiddish to Polish to Russian. Later on he learnt German, then French then English in World War II, as well as Italian after the war: he had become a citizen of the world while remaining profoundly shaped by his early interests in music, literature, and design; his interest in literature and music was an important part of the new community he found in Paris in the future members of Magnum Photos, who shared his strong cultural and political interests.

His interest and involvement in the new state of Israel was keen and as of the early 1950s he traveled and reported there regularly.This particular subject is of course linked to Chim’s Jewish identity; the birth of Israel was no doubt a sign of hope and a consolation after his parents’ murder in the Holocaust, after the destruction of his native city, Warsaw, and his neighborhood of Nowolipki street; and the bombing of Leipzig, the city where he had first studied and learnt about international culture.

While he was, like his Magnum colleagues, a versatile traveler to many lands, Chim is remarkable in that he was never only “passing by”: even on short assignments he managed to integrate himself everywhere he went and to deeply empathize with his subjects. His social range was tremendous, from beggars, circus artists or Les Halles butchers to maimed children to movie stars or writers. Chim also possessed a keen gift for photographing striking cityscapes and landscapes as if they were theater settings. In his compositions, he displayed an almost musical sense of light and shadow placement to very different effects: from the stark photographs of Dachau concentration camps and tribunals to his views of Berlin in ruins or a single destroyed typewriter on a pedestal in the ruins of Gijon, Spain. When his pace was more leisurely, he was able to photograph sensuously the landscapes of Spain, Greece, Mexico, Rome, Florence, Sicily and Venice.

Chim’s life is emblematic of the displacements and passages of the 20th century. His complex itinerary led him through two World Wars and a Civil War, then the world’s attempts to rebuild itself more harmoniously. Following troubled currents of history, Chim negotiated with apparent ease passages from language to language, culture to culture, worlds to worlds. Beyond his achievements as an individual, the idea of group or community was always important to him and his gifts for strategy and administration became obvious in his writing of Magnum Photos’ bylaws and his presidency of the organization from 1954 to 1956.

During his lifetime and after his death, Chim’s colleagues at Magnum and a larger circle of photographers acknowledged his great influence He is probably best remembered for his empathy and his special relationship with children as the most vulnerable victims of wars and social upheaval. As a symbol of children’s suffering in war, that photograph has been an enduring source of inspiration for painters and photographers over the years.

Chim was truly one of the first human-rights photographer, who, in the tradition of Lewis Hine, Jacob Riis and the FSA photographers, practiced advocacy as a vehicle of social change. His photography inaugurated a tradition of photographers working with human rights organizations. Chim’s work with children still influences the younger generations of photojournalists. As the world witnesses the largest number of displaced people since the Second World War, there is a natural connection to be made with his most memorable photography.