Capa Center in Budapest : 40 years of press photos in Hungary 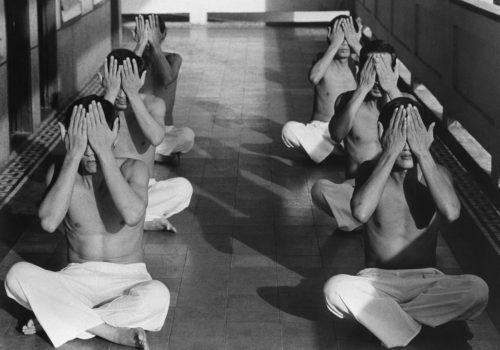 “Has anyone ever thought that he worked as a worthy successor to André Kertész, Robert Capa, Martin Munkácsi, Rudolf Balagh, János Reismann? “ asked the Hungarian photographer and publisher Gera Mihály (1931-2014) when addressing the new generation of photojournalists.

This question is taken up on the walls of the Capa Center which celebrates press photography in Hungary through a large exhibition where the best photos of the last forty years are hung. They were selected by the Department of Photojournalists of MUOSZ, the Federation of Hungarian Press Photographers, which since 1982 has been awarding numerous prizes for photojournalists every year.

The exhibition presents the images of 123 photographers, known or in the process of being known, it retraces the evolution of press photography through several generations. In addition to the photos, you can also look in display cases at the exhibition for books, accessories and the many cameras used over the years, showing the transition from film to digital.

In the four huge rooms of the Capa Center, the visitor can wander around to review with a certain emotion and great curiosity, the events that have marked Hungary since the beginning of the 1980s. A History that is often happy, sometimes banal but above all chaotic, marked in 1989 by the fall of the Berlin Wall. A historic event that caused a break in the Western world that photographers from Central Europe (and around the world) have “covered” for their newsrooms.

Because, in addition to bringing freedom to all the countries under Soviet influence since the end of the Second World War, the opening of the borders also freed the creativity of Hungarian press photographers. We see it through the many photos taken during a simple news event, or during sporting events, parties, concerts or to show the political upheavals towards democracy. One of them – quite symbolic – particularly catches the eye: it is signed Báhalmi János and shows Viktor Orban, bearded, thin and charismatic, haranguing his troops at the podium of the first Fidesz congress.

“It was moving to make a selection among the photos of the last 40 years”, explains in the presentation of the exhibition the photographer and curator András Bánkuti, also president of MÚOSZ and editor-in-chief of Digital Photo Magazine. “We were faced with thousands of photos that had to be selected to present the most important themes and genres, underlining the independence of my colleagues and show their commitment and their sacrifices. Still, the selection, like all selections, is subjective, but we’ve tried to be comprehensive. In these rooms, you can see the reality without alterations, ”he insists.

However, according to him, nothing is as before when it comes to photography in Hungary. “Everything has changed: the press, the political system, technology and even the legal framework concerning, in particular, image rights. The classic photo reportage is now restricted in the homeland of Robert Capa! “, he regrets. He adds: “The golden age of the press ended in 2008 with the economic crisis. All the newsrooms started to save money, especially on photo reportages, often of high quality, which were never published and can only be seen in exhibitions.

But what has not changed is the commitment of photojournalists who give emotion by telling the reality as they have experienced it,” concludes András Bánkuti. On a wall, we can also read this quote from Henri Cartier-Bresson: “It is an illusion to think that the photos are taken with cameras. They are made with the eye, the heart and the head”.

www.a-l-oeil.info is since 2008 a site devoted to photography and journalism, therefore mainly oriented photojournalism.
This site is dedicated to women and men who cover the news, but also lists press agencies from the 20th century to the present day.
It is edited by Michel Puech, journalist and former director of press agencies.