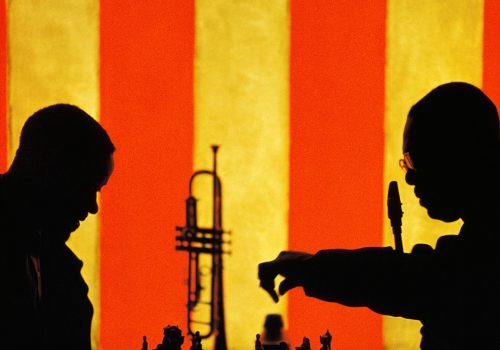 Jason McCoy Gallery, in collaboration with the Burt Glinn Estate and Magnum Photos, presents Burt Glinn: Photographs of the New York Beat Scene, an exhibition of photographs from 1957-1960, curated by Samantha McCoy. Burt Glinn (1925-2008) was a master observer of all aspects of life, who as a photojournalist covered a wide range of subjects in any given year. The late 1950s were especially important years for the Magnum photographer, who joined the agency in 1951. Glinn’s work from this time included the desegregation of Little Rock High, Nikita Khrushchev in front of the Lincoln Memorial, Queen Elizabeth II on her visit to New York, as well as profiles of Sammy Davis Jr., Marilyn Monroe, Elizabeth Taylor and Katharine Hepburn. Glinn was one of few photographers granted access to Fidel Castro’s inner circle, having sped from a New Year’s Eve party on December 31, 1958 to Havana upon hearing that dictator Fulgencio Batista had fled; his images are indispensable to understanding this momentous time in Cuba’s history.

Glinn often relied on his own impetus rather than an assignment to pursue a story, a habit he employed to not only capture historical revolutions, but also cultural ones. In the late 1950s, while at home in New York, Glinn began to shadow the American subculture phenomenon known as the Beats. A selection of these images appeared in a 1957 editorial for Esquire and again in 1959 for Holiday magazine, accompanied by Jack Kerouac’s essay, ‘and this is the beat nightlife of new york.’ In 1960, Holiday sent Glinn to chronicle the Beat scene in San Francisco, a project that entailed Glinn’s most extensive use of color film yet.

Featuring predominantly black-and-white, with some color, work, this exhibition includes images from these iconic publications not seen for over 50 years, and several others that until now have never been available to the public. They were recently discovered, along with Kerouac’s original manuscript, in Burt Glinn’s archive, where they had not been touched for over 50 years. Remarkably, over half of the negatives discovered were color. The exhibition is preceded by the publication Burt Glinn: The Beat Scene, released in July 2018 by Reel Art Press.

Glinn’s photographs from this series reflect a spontaneity inherent to the Beat philosophy: arms flail, music plays, people talk, eat, dance, paint. They are wrought with emotion and tension, and yet exude a calculated nonchalance. They touch on life in all of its glories and absurdities, and seem to depict not just the Beats, but also the ‘everyday’ man or woman. There is a humanistic thread that ties these images together, along with the palpable energy of life in the city: movement, discourse, change.

They transport the viewer to this lost but pivotal moment in the city’s cultural awakening, enabling one to participate as a bystander on the city streets, in the bar, smelling and feeling the atmosphere, understanding the time. Here are raw, detached glimpses of iconic names–Jack Kerouac, Allen Ginsburg, LeRoi Jones in addition to Helen Frankenthaler, Anita Huffington, Franz Kline, Barnett Newman and others–not idealized but rather laughing, talking, dancing seemingly as-they-were. They are names that spanned artistic mediums, challenged norms and invented a new way of being.

Born in Pittsburgh, Pennsylvania (1925), Burt Glinn served in the United States Army between 1943 and 1946, before studying literature at Harvard University, where he edited and photographed for the Harvard Crimson college newspaper. From 1949 to 1950, Glinn worked for LIFE magazine before becoming a freelance photographer. Glinn became an associate member of Magnum Photos in 1951, along with Eve Arnold and Dennis Stock–the first Americans to join the young photo agency–and a full member in 1954. He made his mark with spectacular color series on the South Seas, Japan, Russia, Mexico and California. In 1959, he received the Mathew Brady Award for Magazine Photographer of the Year from the University of Missouri.

In collaboration with the writer Laurens van der Post, Glinn published A Portrait of All the Russians (1967) and A Portrait of Japan (1968). His reportages have appeared in Esquire, Geo, Travel and Leisure, Fortune, LIFE and Paris-Match. He has covered the Sinai War, the US Marine invasion of Lebanon, and Fidel Castro’s takeover of Cuba. In the 1990s, he completed an extensive photo essay on the topic of medical science. He has received numerous awards for his editorial and commercial photography, including the Best Book of Photographic Reporting from Abroad from the Overseas Press Club and the Best Print Ad of the Year from the Art Directors Club of New York. Glinn has served as president of the American Society of Media Photographers. He was president of Magnum Photos between 1972 and 1975 and was re-elected to the post in 1987. He died in Southampton, New York in 2008.