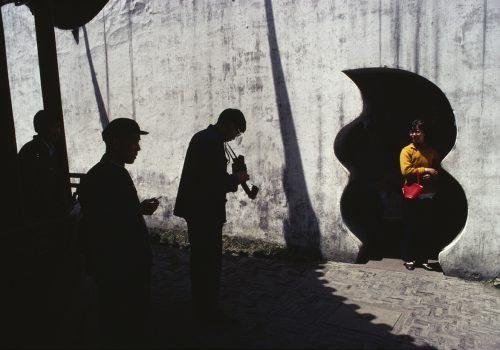 In September 1973, when French President George Pompidou paid an official visit to China, Barbey joined the accompanying press group. He recorded the Chinese at the time with his favorite Kodakchrome film. Since then, Barbey has come to China many times, covering Beijing, Shanghai, Sichuan, Guangxi, Xinjiang, Hong Kong, Macao and other places, witnessing the development of China with the change of color. The book contains more than 300 color photographs taken in China from 1973 to 2018. These photos are extensive in content, exquisite in composition and of great historical and aesthetic value.

In 1961-1964 he photographed the Italians, perceiving them as protagonists of a ‘theatrical world’, with the aim of capturing the spirit of a nation.

Bruno Barbey began his relationship with Magnum Photos in 1964. He served as Magnum vice president for Europe in 1978/1979 and as President of Magnum International from 1992 to 1995.

Over five decades Bruno Barbey has photographed in all five continents and covered wars and conflicts in Nigeria, Vietnam, the Middle East, Bangladesh, Cambodia, Northern Ireland, Iraq and Kuwait. His work has appeared in the world’s major magazines and he has published over 30 books.

In 1999 the Petit Palais, Paris, organized a large solo exhibition of photographs taken by Bruno Barbey in Morocco over a period of three decades. In 2015/2016, La Maison Européenne de la Photographie, Paris, showed his retrospective exhibition which is currently circulating internationally. He published simultaneously his retrospective book “Passages”.

He has received numerous awards for his work, including the French National Order of Merit.

In 2016, Bruno Barbey was elected a member of the French Academy of Fine Arts, Institut de France.

His photographs are exhibited worldwide, and feature in numerous museum collections.

Today he is working on a new project and photographing extensively in China.

Curator in photography, founder of Beaugeste Gallery in Shanghai (2007-2018). Curator of Marc Riboud’s Retrospective in China (2010 to 2013). Consultant for the Dali Photography Museum in Yunnan. Member of the jury for Yangon Photo Festival in Burma from 2008 to 2018. Contributor for Eye of Photography.com, member of the editorial board of Trans Asia Photographic Review. Member of the nominating board for the Lucie Awards. Lecturer at the IG Center in Shanghai. Member of the board for Alliance Française Shanghai. Editor of over 20 photo books.

Dong Qiang, chairman of the Department of French Language and Literature at Peking University, is a noted scholar, translator and literary historian and is an expert on Chinese and French culture. He has been engaged in promoting Sino-French cultural communication for decades. In 2013, he received the top award from the French Institute – The Great Medal of the Francophone. In 2015, he was awarded the French Legion of Honor by Prime Minister Manuel Valls during a visit to China. In 2016, he received an honorary doctorate from Free University of Brussels. In the same year, he was elected as a correspondent, or tenured foreign associate member by Academy of Moral and Political Sciences, Institut de France.