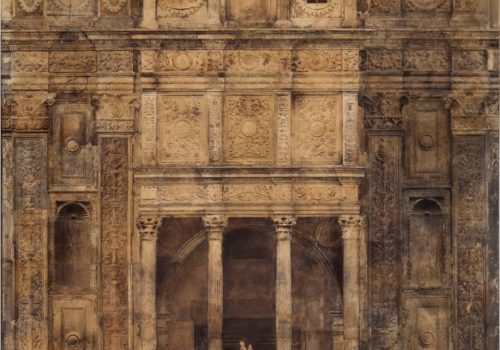 Brescia – a place where ancient and modern coexist – becomes a “photographic universe” that winds along with exhibitions and events. The Brescia Photo Festival 2021 program is dedicated to cultural, archaeological and historical heritages seen through the lens of authors such as Elio Ciol, Donata Pizzi, Gianni Berengo Gardin, Maurizio Galimberti, Giovanni Gastel, Franco Fontana, Federico Veronesi, Alfred Seiland, just to name a few. In addition, unique pieces like the albumen photo collage reproducing the facade of the Chiesa dei Miracoli are on show.

For its 4th edition, the topic is Patrimoni (Heritages), connected to the celebrations of the return to Brescia of the Vittoria Alata, a bronze statue from the Roman era, representing the cultural and identity value of the city’s heritage. After two years of restoration (by the Opificio delle Pietre Dure in Florence), the statue has a new location in the oriental Aula of the Capitolium, redesigned according to the project of the architect Juan Navarro Baldeweg.

Brescia Photo Festival 2021 (artistic curatorship by Renato Corsini) is promoted by Comune di Brescia and Fondazione Brescia Musei, with the collaboration of MaCof – Centro della fotografia italiana. “Connecting the photographers’ creativity with the need to document the archaeological, natural and cultural heritage of our civilisation is the challenge of the 4th edition of the Brescia Photo Festival”, Renato Corsini says.

Among the interesting ongoing initiatives, we focus on two exhibitions, inviting you to discover all the others, too.

The first exhibition, Con amore e cura grandissima, deals with an artwork that is single and multiple at the same time: the large collage (300×250 cm – with over 200 photographs) which reproduces the facade of the Chiesa dei Miracoli, created by Giacomo Rossetti (1807-1882), a photographer from Brescia. This huge picture made up of albumen prints is unique in the context of the representations of architecture and architectural ornament through photography. And this is why  it was awarded at the 1873 Universal Exposition of Wien.

The collage consists of photos taken thanks to scaffolding and to special features to ensure the accuracy of the reproduction scale: it was assembled by glueing the albumen prints on canvas. The junction points were linked thanks to partial overlappings and retouching paint. The restoration work is by OpenCare Milano. The artwork was sold in 1903 to the Comune di Brescia and it’s part of the Archivio Fotografico dei Civici Musei d’Arte e Storia collection, consisting of some 4000 vintage prints. Curated by Roberta D’Adda, the exhibition is on show at the Museo di Santa Giulia. The project is promoted by Comune di Brescia and Fondazione Brescia Musei, with the support of “Strategia Fotografia 2020” call by the Direzione Generale Creatività Contemporanea (DGCC), MiC – Ministero della Cultura.

The second event, the exhibition Alfred Seiland. IMPERIVM ROMANVM. Fotografie 2005-2020, is the first Italian retrospective dedicated to the Austrian photographer, with 136 large format images from the monumental project that Seiland has been developing over more than 15 years of work, with a core of 20 unpublished images (among them a portfolio dedicated to Brescia). Fascinated by the cinematographic sets of ancient Rome in Cinecittà, Alfred Seiland embarked on a journey in the territories where the rule of Rome once extended, from Syria to Scotland to the Mediterranean countries, in order to photograph Roman archaeological sites with the interaction between man and ruins. There are 40 countries seen through archaeological sites (such as Palmira or Epidaurus). The project illustrates the vital relationship between the residual traces of Roman culture and the places of modernity. The Colosseo in Rome, the Pont du Gard in Provence as well as modern buildings alluding to antiquity, like the sets in Cinecittà or the Caesar Palace Hotel in Las Vegas. Seiland, thanks to this project constantly in progress, managed to bring back to the surface, in the globalized world, the traces of the sense of community the Roman Empire had started. The exhibition, curated by Filippo Maggia and Francesca Morandini, is promoted by the Comune di Brescia and Fondazione Brescia Musei and coproduced with Skira