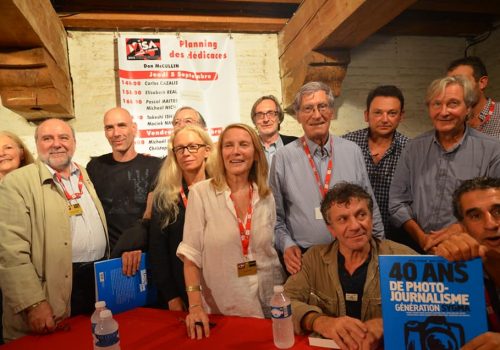 Hubert Henrotte, founder of Gamma and Sygma is dead. The last great actor of the golden age of French photojournalism passed away this Friday, November 20, 2020 at around 3:30 a.m., at the Georges Pompidou Hospital, in Paris, at the age of 86. An intimate religious ceremony will take place and Jean-François Leroy will organize a professional tribute as soon as possible.

Monique Kouznetzoff called him “HH” when she joined the Gamma agency that Hubert Henrotte had created a few months earlier. Those initials suited him well. Two snapping letters, like his character, sometimes blunt sometimes curt, especially in his youth. He had such a desire to do well that he seemed pushy. I only lasted two months at Sygma. When I arrived in the morning, if I was five minutes late, he was waiting for me pointedly looking at his watch, and, he forgot to say hello. Hubert Henrotte was feared. Many years later,  with age, he kept his sharp edge, but was showing sympathy more frequently. In the end, he was a man little known, even to professionals.

Born on June 16, 1934 in Sargé-lès-Le-Mans, a small town in the Pays de Loire in the Sarthe department, he became a student photographer at the prestigious School of Applied Arts in Vevey in Switzerland in 1954. Passionate about motor racing , he made the trip on his scooter from Switzerland to Le Mans to attend the 24 hours of Le Mans. 740 km quite a distance!

In 1960, he joined the daily Le Figaro, as a photographer, at a time when photographers were not yet truly considered as full-fledged journalists. For many years, the press cards of photographers carrie the mention “assimilated journalist”! Obviously the published photographs did not mention the name of the photographer and the agencies of the time (Dalmas, APIS, AGIP, Keystone, Reporters Associés) payed the photographers off the books, or at best with poverty wages with the consequence that the negatives remained the property of the agency. This situation revolted Hubert Henrotte.

As soon as he learned of the creation in Grenoble of an association of press photographers, he became interested in it, contacted Georges Richard the main founder and on December 12, 1964, during the general assembly of the National Association of Journalists Reporters Photographers (ANJRP) he was elected Vice-President. He had a leading role in the development of the ANJRP which will become ANJRPC with the arrival of the filmmakers. He was a member of the Board of Directors, found a place not far from Le Figaro and devoted all his free time to campaigning. Many years later, he told me that the mistake had been not to form a union.

Under his leadership, the ANJRPC brought together all the French reporters photographers, because as he underlined during the general assembly of 1965, it was not necessary that the President of the association be a Parisian, he underlined the importance of the people from the province. Roger Pic, Jean Lattès, Jacques Widenberger, Jean Potier, Robert Doisneau, Willy Ronis, Henri Cartier-Bresson and many others became members of this association.

All of the ANJRPC’s debates fed Hubert Henrotte’s reflection, as did his discussions with Léonard de Raemy. This is where the idea for a different kind of agency emerged, an agency that ensured total control over the production of photographers over newspapers and magazines. Hubert Henrotte then debated not only with Léonard de Raemy, but also Pierre Lelièvre who ultimately did not leave Le Figaro. He talked about his project with Hugues Vassal and Jean Monteux, then a salesperson for Reporters Associés. Jean Monteux spoke to him about Raymond Depardon and Gilles Caron…. The business started taking shape. In the month of September even before the creation of Gamma, he met Grazia Neri, who was then Giancarlo Botti’s agent in Italy, where Gilles Caron was perfecting his star photography technique.

“In September 1966, I was in Paris to strengthen my links with French agencies. My star agency in Paris was Photographic Service “says Grazia Neri” Michel Roi, a fashion photographer for whom I was the agent, called me: there is a photographer, Hubert Henrotte, who wants to see you. I told him I was leaving in the evening… Call him! Ok. I found myself in the Champs-Élysées district, avenue George V. The famous avenue was then a wonderful place, it was the press district. The George V was the bar for journalists. In the surrounding streets, there was Le Figaro, Paris Match, Salut les Copains and other important newsrooms. Hubert Henrotte greeted me very formally and told me that in November he would create the Gamma agency and that he wanted me to represent it in Italy. He was supposed to send me a report in November, in fact the actual start was January 2nd. He also asked me to present it to the photographers in Rome. He told me that French professionals spoke of me as the best agency. His agency, he added, will become the most famous in the world! … /… We shared the commitment to pull photojournalism out of its scandalous anonymity. There was no photographers credit along the published photographs. The conversation got really passionate on my side, colder and more technical on Hubert’s side who is someone I have always appreciated very much. As he said goodbye to me, he said to me: I will confirm everything to you by letter and we will meet again in December in Paris. On December 23 I went to Malpensa airport in Milan, but due to the fog the plane to Paris did not take off. Hubert didn’t want to believe in the fog. He accused me of laziness. I left for France by train on the 26th. Years later, while going from Verona to Milan, Henrotte got lost in the fog on the motorway and then he reminded me of the adventure of 66. The first pictures arrived by a “unenclosed parcel” December 28th in the morning. My world then changed. In addition to taking care of the Italian and foreign photographers that I represented, I distributed the hundreds of photographers that he had chosen to distribute with Gamma. ”

November 14, 1966 Hubert Henrotte filed the statutes of the Gamma agency with Hugues Vassal, Léonard de Raemy and Raymond Depardon. The sequel was to be a series of journalistic successes in which women played a big role alongside Henrotte. Monique Kouznetzoff first, who from “small hand” at Reporters Associés, then journalist who just got her press card at Gamma, began an exceptional career in public relations with the stars of the time. She became Madame Monique Henrotte. And then Eliane Laffont, wife of photographer Jean-Pierre Laffont, fellow student of HH in Vevey, to whom Hubert Henrotte entrusted the representation of Gamma in the United States, where she became “the queen of French photojournalism.” “Monique and Eliane played a big part in Hubert’s success!

In 1973, a crisis between partners and a strike by Gamma staff and photographers prompted Hubert Henrotte to create another agency. It will be Sygma who will set the tone for three decades of photojournalism. The business quickly flourished despite new competition with Gamma and Sipa. Sygma became the beacon of the profession. But, from the end of the 80s, the difficulties appeared. The IT that Hubert Henrotte saw arrive and of which he immediately perceived the importance, required large financial resources which the SME that is Sygma did not have. He Began negotiations with financiers, a sport that the journalist Hubert Henrotte did not master well. At the end of the nineties, he was taken out of the agency by one of the shareholders who sold Sygma to Corbis, a company of Bill Gates. Corbis-Sygma went bankrupt, then all Corbis stock became the property of Visual China Group. A real heartbreak for HH.

When I met Hubert Henrotte quite frequently in recent years, I was always struck by the sadness that seemed to have come over him. He was a man hurt by the fact he had to leave Gamma, “his child,” and be kicked out of Sygma. From interview to interview, I understood that this man of integrity had fought all his life to ensure that photographers made a good living from their profession. And of course, everything in the present day proved to him that his hopes of the sixties flew away at the same speed as the inflation of financial profits.

On January 2, 2005, in the Official Journal we can read: “Hubert Henrotte, CEO of Henrotte Conseil, manager of the Kipa, Kipa-Interpress and Witness press agencies, founder and former director of the Gamma press agency, former CEO of Sygma ”was named Chevalier of the Legion of Honor.