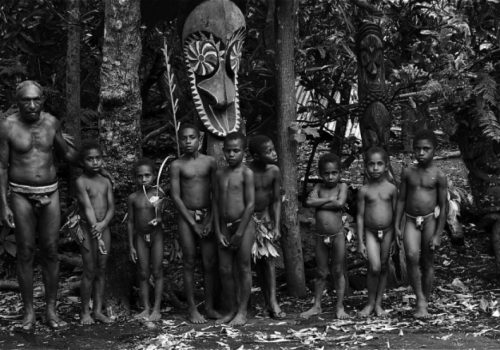 Steidl is publishing a book that is expected because it is surprising. Because of the originality of the subject, on the one hand, on one of the islands a nugget – too little known of the archipelago of “Vanuatu” ex-New Hebrides – and by the beauty, on the other hand of the images of a talented amateur but visibly gifted photographer: Bernard Sabrier.

Fascinated at the age of eight by his father’s Rolleiflex, manipulating the viewfinder cover to project his dream of becoming a reporter already, the young Bernard never ceased to acquire the most useful cameras of each era, Polaroid, Leica, Canon like so many noble tools to satisfy his passion for photography.

His many travels gave him the opportunity to exercise his eye, to the point of making his meeting with the Vanuatu people the proof of a mastered, undisputed talent. Because since 2008, the date of his first report, one might say, in the midst of a tribe in North Vanuatu, his images only reflect his humble desire to be accepted. To better live, among men, women and children, the intensity of initiation rites and traditions of everyday life.

Alternating – idyllic landscapes at the edge of the beaches from which outrigger canoes with surprising sails made of leaves, framed in three-quarter shot, on a group of men wearing helmets surmounted by wooden fish with sculptures and painted  arrows on all sides. Bernard Sabrier also excels in the art of tight portraiture, which punctuates the beautiful model of the work like so many lived scenes. To the double pages of the women, beating in frenzied rhythm the water for a water-dance and water song, succeed the “close-up” of men’s faces, leaves between their teeth to avoid speaking and betraying the secrets of the ranks to conquer.

The young man who from the age of 18 wanted to cross the Hindu Kush to go to Kabul to attend a bouzkachi, in the footsteps of Joseph Kessel, his mentor, has always been concerned about the “discovery of the other ”. Without any concern for internal or external borders for everyone, to honor as an explorer of modern times, the father’s example. As early as 2008, once ashore on a northern island, it was with the desire to return there as quickly as possible that the photographer wanted in 2009 to complete the picture of a society proud of its ancestral beliefs and traditions.

“The images in this book”, confides Bernard Sabrier, “were taken by a 55-year-old boy, amazed by the discovery of a people with long-lasting traditions, welcoming but careful to preserve with jealous care. its secrets. These secrets, I never wanted to try to unravel them, they belong to them. ”

Man of conviction, very humanist at heart a humanitarian actor, tireless, essential in our constantly changing world, Bernard Sabrier has always taken care to make his photographic approach – a goal to “transcend the subject”. To the depths of the South Pacific, his images make Vanuatu the virtuous theater of an ode to respect for a humanity that is also his.

Without any cliché, nor taboo but with a total sense of the Totem, like the man who reaches the highest rank staring straight ahead at Bernard Sabrier, accomplice of a great moment of a community rite.

In the eye of an amateur photographer, who has the makings of a true professional, for having produced in the depths of the Vanuatu archipelago providential images, that now belong to the local and universal heritage.