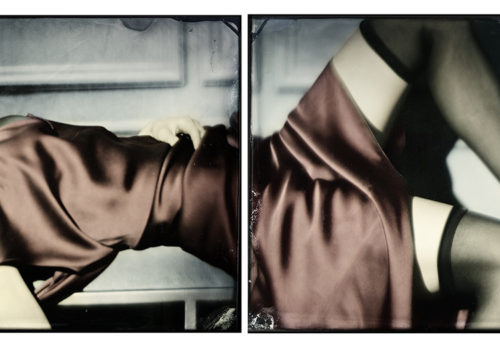 In Mystery Boxes, photographer Barbara Cole connects with both the history of photography and her own personal history in what she calls “the shadow dance between our private and public selves.”

The images in this series are an amalgam of incomplete sets, bits of wardrobe, and headless bodies that allow the characters to interact anonymously with their strange and elusive alter egos. This series has a quiet but insistent feminine power that eschews provocation and sexual innuendo in favor of the language of shadows.

“For years, I’ve been fascinated by the mystery and metaphor of shadows. My lifelong journey with depression reminds me that we are always walking with our past. Without light there are no shadows and the prospect of hope is a powerful personal metaphor.”

By using a turn-of-the-century photographic process called wet collodion and her own modernized twist of adding a layer of color, the resulting tintypes offer glimpses into a particularly feminine soul. The process requires heavy prep work and each handmade image takes at least half an hour to create from start to finish. The final image feels like something lost in time, somewhere between the past and the present.

Mystery Boxes inhabits a poetic space you have never been to but wish you had.

For the last forty-five years, artist Barbara Cole has been recapturing the otherworldly mysteries of early photography in a body of work that flows in and out of time.

Born in 1953 in Toronto, Canada, Cole, eager to shape a place for herself at an early age, quickly turned to art. Immediately out of high school, she began modeling for a newspaper and soon became fashion editor for the following ten years. Her early start in fashion and self-taught practice have informed her intuitive photography that undulates between tradition and invention. Her inventor’s spirit is evident in her preference for raw, hands-on photographic methods. From turn-of-the-century cameras, shadow boxes, darkrooms, and tintypes—she engages directly in shaping her images in order to impart deeply personal truths.

Cole has held numerous exhibitions across North America, Europe, and the Middle East. Her work has also been extensively commissioned internationally for corporate collections. She has exhibited in the Canadian Embassy in both Tokyo and Washington D.C. The acclaimed documentary series, Snapshot: The Art of Photography II, features an episode devoted exclusively to Cole’s photographic practice.

She currently lives and works in Toronto, ON.