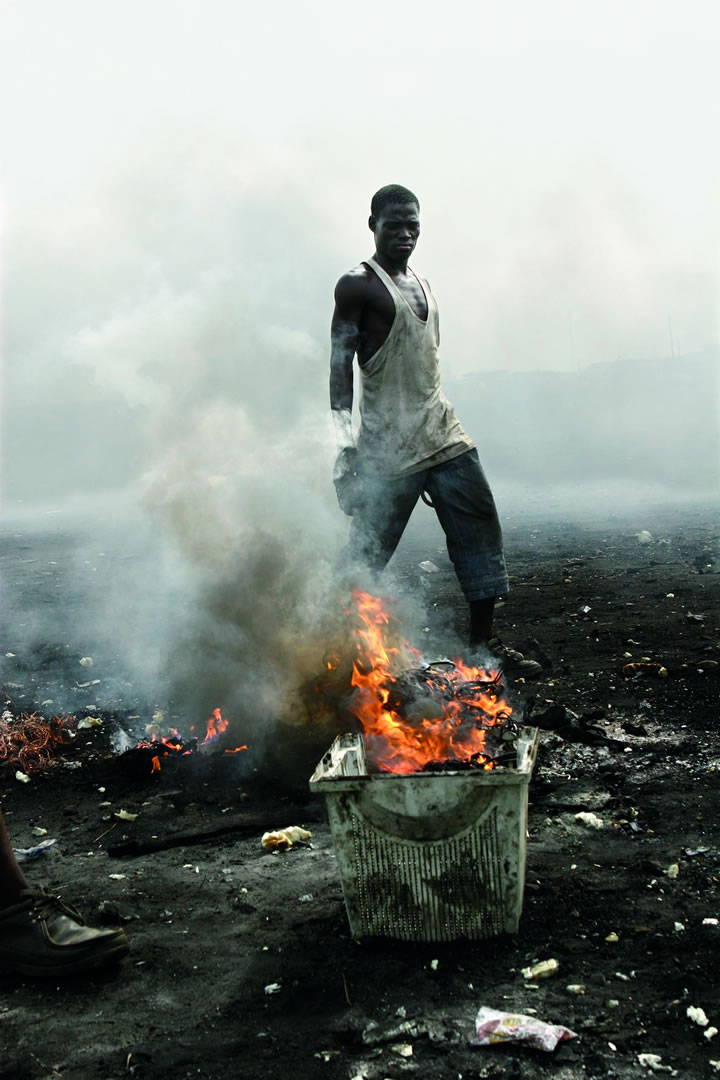 These last few years, Ghana has become one of the main destinations for electronic waste from Europe and the United States. In the capital, Accra, a fully-fledged market has been set up for “e-waste” traffic, an illegal business, tolerated as a financial godsend. Ghanaians living in Europe and the United States take in used computers and dispatch them home by boat. At the port of Tema, the material is retrieved by wholesalers who convey it to the Accra dump to be burned by children. Copper retrieved will be sold on to Nigerians or Indians who transform it into cheap jewellery for the European market. According to the UN, up to fifty million tons of e-waste are produced each year and there are numerous computer graveyards like the one in Agbogbloshie Market: in Nigeria, Vietnam, India, China and the Philippines. The repercussions for the environment and health are dramatic. It is through the trade in e-waste that the refuse of the rich poisons the children of the poor. The Agbogbloshie Market dump sprawls over six miles. Seven days a week, from the break of dawn to the close of day, dozens of Ghanaians, aged 10 to 25, wear their fingers to the bone picking apart old computers and burning their plastic or rubber-coated components to retrieve the precious copper inside and sell it. The work is carried out by hand or using makeshift tools dug from amidst the refuse.They have no masks or gloves. According to a Greenpeace report dating from 2008, the children of Aglogbloshie Market are exposed

to particularly dangerous substances and materials: the lead in the cathode ray tubes of monitors, which damages the nervous, circulatory and reproductive systems; the mercury in flat screens, which damages the nervous system and brain, especially in young children; the cadmium in batteries, which attacks the kidneys and bones; the PVC isolation of electric wires which, when burned, emits carcinogenic chemical substances, leading to respiratory, cardio-vascular and dermatological problems. All these substances are released during incineration. They also contaminate the nearby canal as well as the land where the dump is located, land where cows and sheep graze, amidst the carcasses of computers.