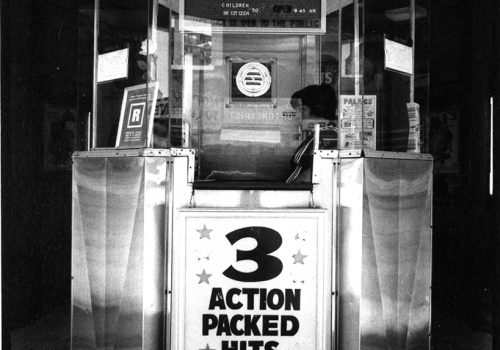 In these days of quarantine, as we fantasize about the pure pleasures that are no longer available to us, Joseph Bellows Gallery presents Bijou: Photographs of Theater Box Offices by Ave Pildas. This series of exquisite, small-scale vintage black and white photographs from the mid-1970s evoke the experience of a particular place. These rare prints document, as the title implies, the small jewel-like structures that crown the facade of their theaters. Pildas’ frontal camera position and distance to his subject remain the same in each image. This methodology forms a visual inventory of various Los Angeles theater box offices, a typology that surveyed the remaining traces of a vanishing architectural and cinematic culture.

Early in his career, Ave Pildas worked as a photography stringer for Downbeat Magazine. Born and raised in Cincinnati, he worked in the Ohio Valley and Pennsylvania in the 1960s. In 1965 he moved to Switzerland to pursue graduate studies in graphic design at the legendary Kunstgewerbeschule in Basel under Armin Hoffman. After returning to the United States in 1968, he moved to Los Angeles, and in 1971 he served as Art Director for Capitol Records. While at Capitol, Pildas designed and photographed album covers for various recording artists, including Cass Elliot and Lou Reed’s Velvet Underground. He launched a career as a freelance photographer and designer soon after, specializing in architectural and corporate photography.

Ave Pildas’ photographs are in the collections of the Museum of Modern Art, Milwaukee Art Museum, New York Public Library, Bibliotheca National, the Black Dog Collection, and the Center for Creative Photography, among others.

Also available, Ave Pildas, Bijou. A signed, limited edition book published by Nazraeli Press in 2016. This first edition hardcover is the 96th entry in the One Picture Book series, published in an edition of 500 copies. This small book includes 12 duotones along with a tipped-in original photograph and signed by Pildas on the verso of the print. Price: $50.00