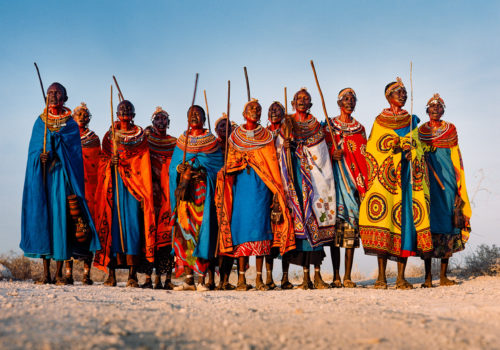 Nadia Ferroukhi presents Les Matriarches at the Atelier/Galerie Taylor in Paris. An eponymous book is published by the editions Albin Michel.

Right to education, salary, autonomy, political representation, right to contraception: these are some of the rights that women have wrested since the 17th century, after bitter struggles at the heart of the various patriarchal societies that dominate the world .

But there are also societies, few in number, which operate differently. Societies where certain key powers, such as the management of wealth, the organization of ceremonies and important arbitrations concerning the family or the village… are in the hands of women. Societies that maintain their specificities despite their patriarchal environment without representing an opposite regime, that is to say the domination of women over men.

Ten years of reporting in ten countries, each with its own particularity.

Here, it is the women who pass on the name and heritage, being at the head of their lineage; there they own the land, the house and the cultivated land. Here, they choose their companion; there, they decide their divorce, if necessary. Here, they invented traditions in a society without men, because they were victims of their violence and out of a need to regain their dignity; there, they organized themselves in the face of the long absence of men. Here, they attribute to each the economic task; there, they manage the financial resources. Here again, they organize religious ceremonies; there, they embody the soul of the missing men. Here, they are decision makers on a council; there they are sovereign as much as their kings are.

What makes these communities unique is that women form the backbone of society and that their central, feminine role is respected as such.

In fact, if we can speak of the power of women in certain cases – or of “matrilineal societies” when the woman transmits the inheritance, name, titles, responsibilities, residence rights, etc. from mother to child, or even “societies of maternal law” as Claude Lévi-Strauss called them, when they have powers other than that of transmitting, such as the choice of the place of life during marriage – the word “matriarchy”, is not retained by most anthropologists. Although used very frequently because of the fantasy that it arouses in the collective imagination by reminding one of the Amazons, the matriarchy, as a symmetrical and inverse figure of the patriarchy, is “only a mythical figure, which never actually existed ”, as Françoise Héritier assured:“ matriarchy presupposes that women lead the whole of society and consequently the men who form it ”. Others, few in number, like to claim the opposite. I will not go into this expert discussion here. My purpose is not to demonstrate but to make known the different approaches of these women around the world to transform their society thanks to the powers that certain rules confer on them.

No doubt this is so because they know above all that their society is based on the right balance, on a cyclical vision of life as of nature of which they are a part on the same level as men. Because there is a constant in all the groups that I met during these long years of photographic work: by the exercise of their power, the women take great care to keep this fair balance by integrating the men without ever dominating them. .

It should give pause to those who swear that the patriarchal system or that hegemonic power of one sex over the other is the one and only way to live together.