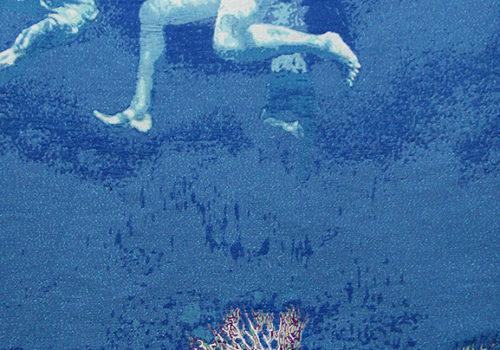 For ten years, the Galerie Binome has been exploring new forms and the limits of photography. For its second participation in Art Rotterdam, the Galerie Binome proposes «Between two», a group show of four artists Laurence Aëgerter, Anaïs Boudot, Thibault Brunet and Marie Clerel. The selection of the works revisits the approach to landscape in photography, shaking up all the traditional markers of the medium. Between the real and the virtual, representation and abstraction, the visitor is no longer sure which is reality or fiction. The materiality of the works on textile (tapestry, sheet) or on glass, their volumetry in space (photogrammetry, sculpture) or their development in sequence (calendar, video), allows us to consider what contemporary photography can be, in a very current double movement of reappropriation of old processes or extrapolation of  new technologies in the field of photography.

Laurence Aëgerter
Longo Maï, 2013 – 2020
The Longo Maï series takes its roots from the Web and is based on a dozen digital images collected by the artist. They are anonymous low-resolution photographs which Laurence Aëgerter, using the art of displacement, metamorphoses into sumptuous Jacquard tapestries.

The title Longo Maï is an expression from Occitany, the region of origin of the artist who grew up in Marseille. This Provençal phrase, is used when raising a glass to life to say: «may your happiness be eternal». In turn, Laurence Aëgerter wards off this fragile balance of things by transforming simple holiday photos lost in the depths of the Web into a monument to the pleasure of the moment.

Laurence Aëgerter’s Longo Maï is an ode to life which, in the form of a metaphor, weaves the little story of photography. Originally, it is that latent image that waits for light to bring the memory to the surface.

Anaïs Boudot
Un rayon dans cette mer sur une lune, 2019
The title of the series Un rayon dans cette mer sur une lune (A ray in this sea on a moon), borrowed from Rainer Maria Rilke’s Poems to the night (1916), evokes the movement of our gaze on the world, the movement of our uncertainties. The stones of the Basque coast, eroded by the tides and the wind, recreate cartographies with their currents, beds, mountains and craters, in a rough and shiny materiality. One could see aerial photographs of distant planets or satellites, one could travel by imagination in their meanders, one could read graphic signs drawn by the elements. Whether microcosms or macrocosms, these territories are only inhabitable by our projections… in short, they are transitory objects for our imaginary journeys.

Marie Clerel
Midi (Noon), 2017-19
For the Midi series, Marie Clerel had an appointment with the Sun. Every day at noon she exposes for the same amount of given time a sheet of UV-sensitized photo paper using the chemical of cyanotypes. In these daily gestures, each micro-variation of the material – the roughness of the paper, any manual application – resonates with the, also ever-changing, weather. Referring to the classical French form of the monthly calendar, each pieces is composed by 29, 30 or 31 cyanotype prints in shades of blue suggesting  the sky, cloud cover, mist, plane trail or bright night.

Untitled (Ciels ‘Skys’), 2016-20
With Untitled (Ciels), another series of cyanotype prints begun in 2016, Marie Clerel develops a protocol, like a ritual of meeting the Sun when she travels. Large cotton sheets, which she has soaked in a chemical bath before departure, are tossed around in her luggage before being exposed to the sky: a place and a time from which the unique piece takes its title.

Thibault Brunet
Territoires circonscrits (Confined Territories), 2016-18
Launched in 2015, the « Territoires Circonscrits » project is a study inspired by photographic missions of the last century (FSA, DATAR). On the French coastline, equipped with a 3D scanner to capture 360-degree shots of his surroundings, Thibault Brunet produce images which could almost be 3D models. By developing these landscapes in virtual reality, he plays on the ambiguity of the image’s position to uncover its narrative potential. Distanced from reality, these areas are the setting for an almost cinematic scene.