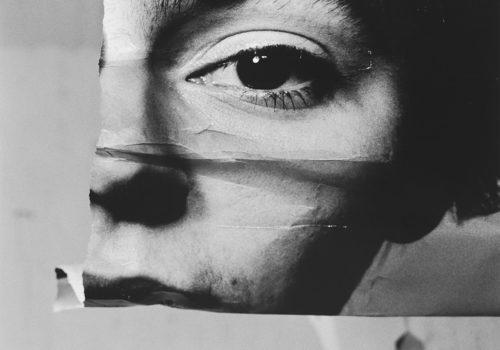 Amin El Dib follows a unique path of the brutal deconstruction of his images. The new construction, created from the destroyed image, touches the retina and thus our innermost being, sometimes to the point of pain. The whole idea aims to capture the ephemeral nature of life and its fragility.

We show the early works of Artaud Mappen (1988-1992), “Artaud folders”) that were created in Berlin, in particular in Kreuzberg. El Dib photographed many of the performances of the “Theater Antonin Artaud” collective with plays by Artaud, Lautréamont, Pound and Cendrars in the spirit of Antonin Artaud (1896-1948), staged in demolished buildings or catacombs as well as in the Künstlerhaus Bethanien, SO36 or the Hamburger Bahnhof. Artaud developed the “Theatre of Cruelty” which broke with the classical mediation of literature and offered compositions with sound and voice, dance and gestures. Stage and audience merged with the aim of giving the viewer a completely new sensual experience, even inducing them into a trance, experiences that El Dib mirrors in his photographs.

The experimental work Fotopapiere (2002-2006), “Photographic papers”), in which light-sensitive paper is exposed to light for long periods of time, will be presented.

In addition, the new cycle Your All Beauty (2021), consisting of collages, will be part of the exhibition.

This exhibition allows you to experience the trajectory of Amin El Dib’s work from its beginnings to the present day. Many of these works are presented for the first time ever. After Arles, the exhibition will be shown at Collection Regard in Berlin. A catalog accompanies the exhibition.

The photographer Amin El Dib, born in Cairo in 1961, moved to Germany with his family in 1966. After completing his architectural studies in Berlin (1990), he devoted himself entirely to photography. He has developed an extensive body of work in which he deals with the ruptures in human existence and the appeal that lies in these ruptures. Even if El Dib presents photographs in classic analog prints, his works/cycles question the classic presentation through sometimes violent manipulations such as burning, tearing, stitching, deforming or gluing, through deconstruction and recomposition in the negative as well as in the positive. By doing so he questions the photographic process at all levels of its development. He has been a member of the German Photographic Academy since 2001. He has living and working near Basel, Switzerland, since 2003.