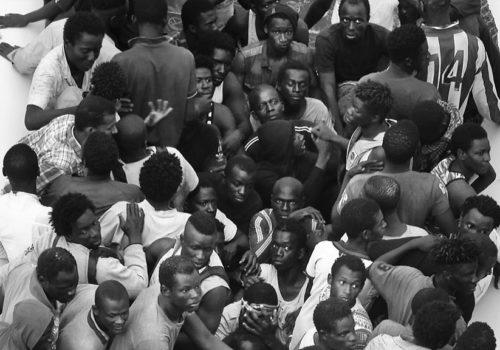 Hoopoe. (Of the Hard Seas).

On the route of human migration, through the Central Mediterranean Sea.

The sea was scary.  Its immense roar spoke of a force far beyond human skill and strength. But not beyond human courage. In fact, despite its indifference to our destiny, humans have never backed away from crossing the hard seas.

Since the 1990s, millions have attempted the crossing of the Mediterranean from Africa to Europe. Tens of thousands never made it beyond the water. But many more did.

The widespread narratives on migration, both the ones shaped by fear of the other and usually exploited by right-wing populism and the ones inspired by pity – for opposite reasons – depict a passive and desperate humanity trying to survive. But at sea – where everything looks different – this was not my impression. Looking in the eyes of the hundreds I encountered I saw the hard test of the voyage and of the sea. But I also saw the spark of rebellion that makes everyone I met an unsung Ulysses of our times- Migration – leaving one’s own, embarking on a painful, dangerous journey towards the unknown – looked to me like the ultimate form of rebellion against one’s own fate. The opposite of passivity and desperation. Which does not make it less hard. But it makes it much more brave. Mostly for the love of their children, these women and man took a step into the limbo of the sea they could have not taken, in the hope to achieve a better life. Which is what I wish.

Whilst embarked on the rescue ship, surrounded by sea for miles and miles, with no land anywhere near us, one day we woke up to see an Hoopoe (Upupa Linnaeus) flying nervously around the deck. She was incredibly far from where she belonged, from the rural areas of Africa, from drinking water, from the insects and seeds that would keep her alive. Her only chance to survive in the vast deadly blue of the sea was to hop from ship to ship, trying to find those sparse minuscule moving
islands in the sea. I wondered what had pushed her to take on such an irrational, dangerous crossing. A sailor told me it was not common but also not rare to see land birds do that. There must have been a reason. I don’t know which. I guess it is not wrong, however, that the reason was life itself. Life sometimes demands daring flights with no guarateed landing.

She stayed on the ship for a few days- I imagine she ate and she drank of humidity collecting at night on the metal deck. Then one day she flew off. I had tried to take a picture of her many times while she was on board but failed as she feared humans and flew nervously and quickly. Only once, I caught her. It is the picture that concludes this essay and gives it its title.