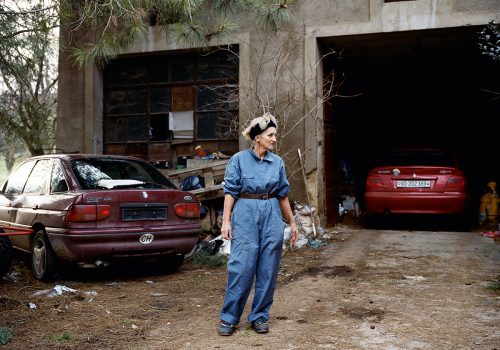 For twelve years, Anne Golaz collected souvenirs of the Swiss farm where she grew up. The result is Corbeau, a book that combines photographs, drawings, as well as texts by Antoine Jaccoud who has helped the artist retrace the history of three generations through conversations with her family. Time, life, fate, and death are the predominant themes in Corbeau, which takes its title from the poem by Edgar Allan Poe, in which future is perceived only as reminiscence of the past and of childhood. The raven is an enigma, the invisible narrator, a mediator between life and death, who recounts what is no more.

Corbeau is subdivided into three chapters, “Le Travail” (that is, work, in French, but it also refers to a type of machine used to groom cows’ hooves), “The Nebula,” and “The Other Side,” which describe the passage of time in a confined, delimited space. The story follows the main character and traces a period of transition between the time of the father and the time of the son, but without leading to a definitive conclusion.

“The story needed to take time in order to find itself: one character is born, another dies, the world of farming is radically transformed,” explains the photographer. “The only thing we could do was to come and go, observe the changes taking place, contemplate them, and try to understand what was happening. But what was the most interesting for me was that some things seemed to have remained unchanged for so many years. They were contradictory, beautiful but sad, poetic and real, but also fragile, self-contained, and oriented toward the past, and yet so precious. While I looked on, I realized that they were already almost memories.”

In addition to the agrarian world and the exodus of farmers, these images suggest fundamental tropes, such as the passage of time, life and death, mixed feelings about belonging to a place, a heritage, and complex familial bonds, on the one hand, and, on the other, a destiny that can only be shaped in places cleared of the cobwebs of childhood.

Irène Attinger is head of the library and bookstore at the Maison Européenne de la Photographie in Paris.