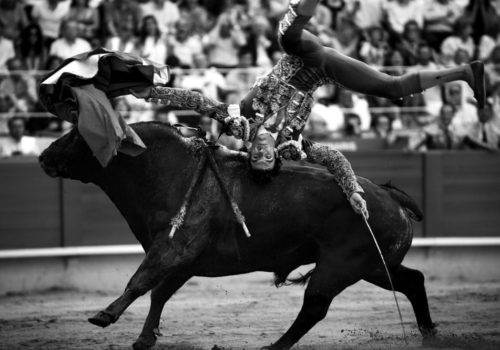 “Sangre de Reyes”, is a critical and deep look at the experience of life and the denial of death, through ephemeral moments of bullfighter José́ Tomás. A very cinematographic vision of bullfighting today, of the vitality of death. The protagonists: the fighting bull and the torero José́ Tomás, are exposed with all their might in images where life and death are inextricably linked, reaffirming, in the same way, that to die is to know how to live.

Carlos Cazalis seeks his personal approach to the world of bullfighting with curiosity and interest in facing death. Death is the constant in this photo where, just as subtly, the author invites us to reflect on the reasons why we kill.

Cazalis underlines in the black and white of his photographs the intertwining of man and bull but above all highlight the animal with more vigor, giving it an equal role as matador.

Cazalis’ thesis, expressed in Sangre de Reyes, invokes the argument of denial of death, culturally inculcated through the philosophy of Ernest Becker, winner of the 1972 Pulitzer for his work Denial of Death. Cazalis shows us how the bullfight turns out to be a projection, for the audience present, of its most essential fear, offering to the prodigal son before death, this martyr who must free us from the horror of facing our own atonement.

Cazalis, whose bullfighting origins are located in Aguascalientes, Mexico, is the nephew, grandson of matador Alfonso Ramírez “El Calesero”, and grandson of Jesús Ramírez Alonso, businessman of the Plaza de San Marcos for over 30 years.

In 1999 he completed a Masters in design at the Parson School in New York, where he later taught. He returned to photography in Spain as a freelance contributor to the Corbis Agency, for the “New York Times”, “Stern”, the “Guardian” and many more.

In 2009, he received a World Press Photo for his work on the urbanization of Sao Paulo which gave birth to his first book “Occupy Sao Paulo” (Kehrer, 2012).

Through the series “Sangre de Reyes” he plunges us into nine years during which he followed the bullfighter José Tomas in Spain, Mexico and France. The book published in 2016 by Editorial RM is accompanied by a text by Jon Lee Anderson and Jacques Durand.