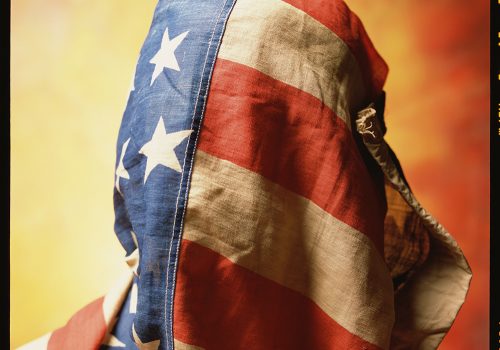 Galerie Nathalie Obadia Brussels presents Infamous, the fourth solo exhibition by the American artist Andres Serrano at the gallery, after Sacramentum, Sacred Shadows (2012) and Cuba (2014 in Brussels and Torture (2016) in Paris.

For more than 30 years, the New York based artist Andres Serrano (b. 1950) addresses fundamental social and ethical issues on the fringe of American society. He captures the Zeitgeist  of the margins of our western community where we all take part in as actors, witnesses and victims.

The series Infamous untangles the long history of the subconscious deeply rooted racist culture in America. This oeuvre is about years and years of race baiting in America by persistent bombarding, even on a level of ordinary consumer products, with a certain savagery in their portrayals of African Americans. According to Henry Louis Gates Jr., the American literary critic and historian: « The shadow of these images still haunts every African-American existence within American society, like ghosts of the Jim Crow past. »

This new body of work consists of sixteen photographic portraits of racial relics: from simple toys to old garments of the Ku Klux Klan. Through these works, Andres Serrano reinvestigates a dark period in America’s recent history, when in 1870s the Jim Crow Laws legislation  approved racial segregation directed against African Americans and reduced them to second-class individuals. Although the laws have been abolished in 1965, the socio-cultural impact of promoting racial stereotyping is still very present today.

Throughout every form of advertisement, ordinary consumer products were at the time decorated with popular stereotypes assigned to African Americans that served as a form of authenticity or nostalgia in white people’s imaginations.

Reinforced by the unambiguous description of its titles, the images leave no doubt about their offensive degrading imagery towards black people.

In his typical very consistent visual language, he deconstructs the reality of these racist relics by framing them in the tradition of historical painting in big size formats. Each portrait results in a monumental aesthetic rendering acting like a visual mantra that reinforces the racial stereotyping in this series.

A strong example of that are the very offensive works Carnival Games-Alabama and Carnival Games – Hit Me Hard that go beyond the representation of racist imagery. The audience of these popular board games were invited to throw at a broad smiling black man’s resemblance. Perceived as a fun entertainment, it unconsciously arouses violence against African Americans.

The omnipresence of slanderous anti-African-American depictions as targets in games or as toys is also shown in the figures of Mr Blue and Mr Red, had two major consequences: to perpetuate the image of a lower and inferior population in the imagination of white people, but also to victimize African Americans through intimidation and fear.

In general Serrano’s work are mental images. The representation in his photographs surpasses its portrayal, transcended by highlighting forms, colors and shapes. They become metaphorical images.

The allegorical composition of Flag Face represents America as a figure covered by a full-headed hood made of a national flag from late 19th century. The depiction immediately recalls to the practice of torture whereby the identity of an individual is erased. This non-portrait reveals the crushing responsibility of the United States in his prolific role as suppressor of other races. This moralistic ambivalent tension is enhanced by the presentation of the figure: isolated against a colored backdrop, enlarged and stage-lit.

What also transpires through this series is the personality of Andres Serrano the artist as well as the collector. Especially after his recent exhibition The Game: All Things Trump an installation of 1,000 objects all bearing the name Trump collected with the sole purpose of creating a giant installation, the artist decided to continue on an exploration of objects that tell a story. The privately-owned objects in « Infamous » amplifies a wider subject matter in his research of all socio-cultural aspects in the United States.

With this series Andres Serrano aims to accelerate the awakening of the spectator’s social and collective conscience of the persistent race-making in everyday imagery throughout the United States. Through these objects of intolerance, the artist opens up the discussions about race, race relations, and racism. As a passionate observer of America, he lets us see once again the lucidity of his vision and makes us understand that our world is made of images from the past that continues to shape the present.

Andres Serrano is an artist who understands his country’s deep cultural contradictions and rifts. Deeply humanistic, his photographs bring together the best and the worst of what our society can produce.