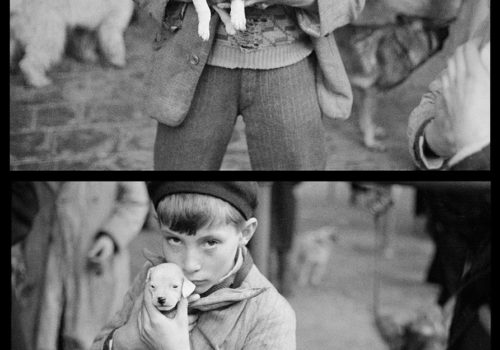 The presentation of this exhibition by André Kertész (1894-1985), one of the most popular photographers of the 20th century, marks a reunion with this great artist since L’Imagerie devoted, more than twenty years ago, a retrospective  to him from October 16 to December 4, 1999.

More than a heritage exhibition, this time it is an original look at unpublished images: the curator, Cédric de Veigy, dived into the negatives of Kertész made in Paris with his Leica between 1930 and 1936, in order to observe and reveal the mechanisms of creation at work.

Ahead of his time, Kertész was a pioneer, one of the first representatives of photographic modernity through the diversity of his subjects as well as by the rupture  with the form. The one Cartier-Bresson considered to be one of his masters, however, had a belated recognition. His work (negatives, archives, correspondence), bequeathed to the French State by André Kertész in 1984 (and kept since 2005 at the Mediatheque of Architecture and Heritage), has since been the subject of many studies, but his practice of the 35mm format and his use of the Leica remain largely unknown.

With this camera, the photographer’s eye no longer focuses on a frosted surface but is projected into a frame that juxtaposes his field of vision. A viewfinder, of a new kind, allowed the gaze to seek its bearings in the image while the body takes its support in space. By taking this camera to the streets of Paris, suburban vacant lots and country lanes, Kertész invents in a few seasons an approach that will pave the way for many vocations of photographers: the photographic stroll. “I took a few steps with him, and I got the picture,” he sums up simply.

The recent and unpublished study carried out by Cédric de Veigy (historian of photography, teacher-researcher and curator) on the original negatives preserved by the Mediatheque of Architecture and Heritage made it possible to reconstitute for the first time the chronological continuity of images that the photographer took between 1930 and 1936 with his Leica.

Result of this research, this exhibition proposes to go back to those shooting moments and observe the few steps of Kertész with those he photographed. From one picture to the next, we will discover his favorite places and subjects. By sharing the intimacy of his gaze, following when the shot is taken, observing his different framing, his way of moving and observing, visitors and readers will be invited to better feel how the gaze thinks, to the triggered instant.

André Kertész, Marcher dans l’image was co-produced by the Mediatheque of Architecture and Heritage (Ministry of Culture) and the Robert Doisneau House of Photography (equipment of the EPT Grand-Orly Seine Bièvre), with the collaboration between Stimultania (Strasbourg), L’Imagerie (Lannion), the Hôtel Fontfreyde (Clermont-Ferrand) and the Musée de la Photographie (Charleroi).