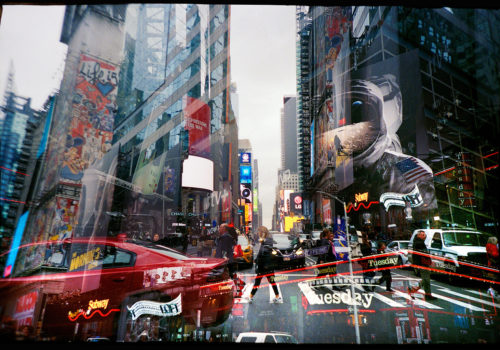 Eclectic, is a five-year series of double exposure photographs of Street Environments of different cities, countryside and beaches from around the world. Where each city has its own distinctive pace of elements, circumstances, colours; an array of miscellanea that shape what we call memory; a human quality as ephemeral as ever-changing.

All pictures where taken with a 35mm and 120mm film cameras using 100, 400 and 800 ISO colour film, applying the double exposure technique. Creating a balance of colours, shapes and symmetries but doubled with new layers of perspectives and appearances in order to sharpen our imagination and take us to a new level of beauty and visionary abstractions.

“When I am shooting in double exposure with my 35mm and 120mm film cameras, in a way and style, I am trying to capture the true essence of a city or an area. What I want to convey is my perspective of “what you see is what you get” by capturing those unique moments when I catch an image. The double exposure allows me to capture all that but can take my images to a different level where I can be more creative by holding double-layered scenarios that will give the viewer a magical, almost surreal, perspective and sense of unnatural futurism.”

Alexandro Pelaez is a Multi-award winning Latin American fine art film photographer based in London who initially started his professional career in Advertising in USA. Having moved to London in 2001, Alexandro completed his second BA (Hons) at Central Saint Martins, University of the Arts London. Since then, Alexandro has received numerous photography awards around the world and has worked over the years on various photography projects with different clients in the UK, Latvia, Germany, Italy, France, Hong Kong, Shanghai, Mexico and USA.

Recently, Alexandro received the 2nd place award by the IPA International Photography Awards 2019 in New York, Finalist at the AOP 2020 OPEN AWARDS, First Prize Award at the 2020 Chromatic Photo Awards in the category of Street Photography.