Alexandra Vainshtein –Lessons learnt from a trip to rural 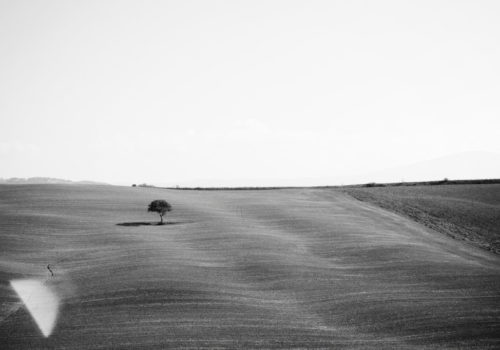 Alexandra is an photographer who lives and works in New York City.
Her works was published in“Volver Al Sur” playbills in Broadway, show poster in Japan, magazines and newspapers in Argentina, Germany and USA.

Lessons learnt from a trip to rural ……
While traveling through Tuscany, I encountered the same scene again and again: a single tree in the middle of a ploughed field, surrounded by waves of earth or rows of crops.
I thought the farmers were environmentally conscious, preserving nature; leaving the tree to grow undisturbed. But as the locals explained, farmers did so to create a shadow, so as to have a break in middle of day, without walking all the way home. They could sit under the tree and relax in the cool shadow it would cast in the midday sun.
I had another thought about the tree I saw in Tuscany. The tree standing alone in the middle of a field surrounded by smaller plants, in a way reflects our society: the lone individual surrounded by the throng, the conforming masses of humanity. The rugged individual surrounded by the mediocre; the individual, somehow different than the others around him, together, yet apart.
The tree is different from the other plants just as the lone individual doesn’t look and think the same as your average person; some look at the world and ask why? Others look at the world and ask why not?
A tree and an individual are alone in the field. But does the tree or the individual choose to be alone?
If one continues to drive along one particular road I often found myself, you can find another field with another tree in the middle. The scene will repeat again and again.
These individuals are not alone. They simply exist in a different field where they stand alone. But these solitary figures are kindred to the other solitary trees in the other fields, and so it is with man; fields are simply the counties in which people stand alone.
In our society, past and present, individualism can be unwelcomed and treated harshly. Society often perceives individualism as a threat. Some societies insist on rigid conformity and frown on the individual.
But fear not. Every great stride in human progress has been made by rugged individuals who flaunted authority, conformity, norms and mediocrity to achieve greatness.