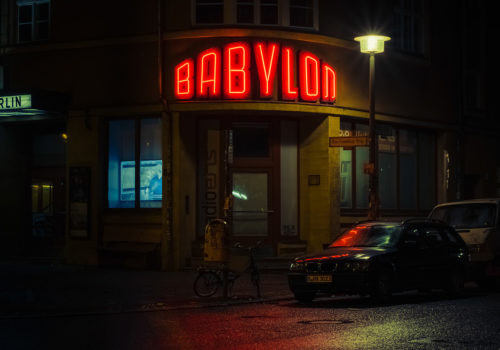 Berlin based photographer Niklas Soestmeyer does some of his best work after dark. His intensely atmospheric images  capture a sense of metropolitan urban alienation,  loneliness and dislocation. Often, neon lit signs and advertising  – masterfully deployed as visual markers –  provide the roadmap on this journey into Berlin nights.

Niklas Soestmeyer is a street photographer – although not in the conventional sense of the genre. People – traditionally a defining aspect of the genre don’t feature very much in his photos. Notwithstanding that, the photos are not entirely devoid of human presence. People might not feature in the frame of the image, but their presence is – sometimes eerily – felt.

Niklas Soestmneyer skillfully operates a colour palette that becomes a characeristic trademark of his photography. His rich and warm colours  – often used only sparingly – can be reminiscent of the Kodachrome colours we encounter in Fred Herzog’s photos.

What drew you to photography / When did you start?

I actually started with an old Minolta from my Dad when I was round 16/17 but then abandoned photography for quite a while and then rediscovered it when I got my first smartphone in 2010. I kinda kept on snapping scenes that somehow appealed to me. These happened to be mostly moody and calm settings. I used it more as a logging tool for moods than an actual camera to document sceneries

Are there any photographers who have Influenced your work / heroes?

I like Alec Soth‘s work a lot. He‘s got a dreamy depth to his imagery that usually makes me phantasize about what happened before the picture was taken. I also relate to the conveyed moods a lot. Also obviously Edward Hopper is a big inspiration for me and Wim Wenders. I like how slow and steady he unwinds his narratives. I enjoyed his documentary about Sebastião Salgado “The Salt of the Earth” very much.

What part does photography play in your life?

I use photography to process my environment, to look a second and third time at one and the same situation. It makes me more aware of what surrounds me. I usually carry a camera with me wherever I go. I has become sort of an extension of my body. I don’t do professional or contract photography really. I always felt like it’s very compromising and took away a lot of the playfulness that I need to come up with pictures I like. This is better left for people that perform well under pressure. That is definitely my strong suit. But I’m ok with that.

A lot of your photography is taken at night time. What draws you into into the night?

I grew up with two brothers and two busy parents. There was always a lot going on. I was more of a loner and an introvert. I was always reading under my blanket when I was meant to sleep. I just enjoyed that quietness a lot and was always drawn to situations that had the same kind of calm. I like the fact that there are usually at least two sides to everything: One rough and wild side and one quiet and contemplative side. I enjoy the contemplative side a lot. Walking around Alexander Platz in the middle of the night gives me a special feeling, knowing, that 6 or 7 hours later this place will be crowded and buzzing, but that at night all of this is my playground.

There is characteristic and recognisable use of colour in your pictures. Can you tell us about that?

I think that I cannot deny that I’m very influenced by old imagery. I don’t do it consciously but, I feel, that most of my pictures have relatively muted tones. Like older analog pictures have. I don’t think about it to much. I don’t have a reference look that I want to go for. These muted colours and distinctive color palettes usually reemerge time and time again without me doing much consciously.

How do you go about finding and choosing locations?

I rarely do active scouting. Mostly it’s just walking or driving at night till I find something that catches my eye. A situation that makes me feel something. But I also would like to do more pictures of spaces that have a certain Genius Loci, some sort of spirit that is unique to a place due to what happened or happens there. For example when I went to Glienicker Brücke between Potsdam and Berlin I tried to imagine the atmosphere that must have been around when Russians and Americans exchanged spies there during the Cold War, like in the movie “Bridge Of Spies” with Tom Hanks. I’d like to do things like that more often.

There are no people on your photos. Is there a particular reason for this?

I feel that people dominate pictures very easily. It determines the setting very fast. I usually don’t like if a setting is closed or directly hints at something. I don’t want to tell the story of one or a group of people but the story of a place or a situation. Which eventually is a story of the people that built a place and make it what it is. I feel that traces of people sometimes tell you more about the people than the actual people themselves.

A lot of your photos show inner city environments. Inner cities / human concentrati0on / not in your photos, why?

I like the contrast between places that are normally crowded, but are not crowded when I take pictures of them. Maybe I just like to see that there is a possibility that one and the same place can be crowded, full of activities and people interacting and 12 hours later it feels like a completely different place. I sometimes think of how Potsdamer Platz was one of the biggest, busiest places in Europe in the 20ies and was completely deserted when the Wall ran through it. The same place and a completely different atmosphere. A difference like night and day.

The online exhibition Berlin Nights has opened on April 1st  and will run until May 28th.