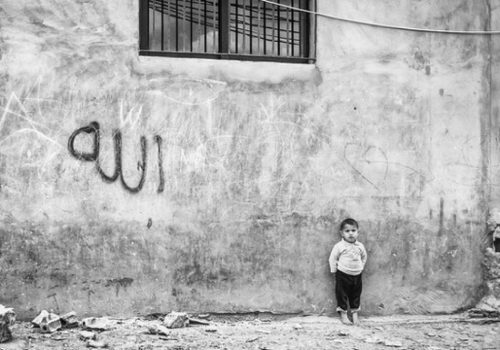 His name: Alain Licari. He sent us the pictures he made in May in a Syrian refugee camp. They were accompanied by these two texts.

“In Lebanon, life is a daily struggle for more than one million Syrian refugees who live without or almost no financial resources. There are no official refugee camps in Lebanon. As a result, Syrians are scattered in urban or rural areas in more than 2100 communities and locations across the country. They often share precarious and overcrowded housing with other refugee families. “[1]

About fifteen Syrian families live in this camp in southern Lebanon. For the most part, they were farmers from the Aleppo region who have fled violent fighting. They have lived there for a few months or a few years, and all-men, women, children-are trying to rebuild themselves, to find again despite everything the daily life lost with the war. Many hope to return home at the end of the conflict. Others would like to go to Europe and start a new life. But all know that nothing will be like before.

These photos do not show the horror of the fights. No dead, no collapsed buildings. Yet the war is there, in the background, behind the difficult living conditions of these families who fled Syria to save their lives. In each of the unspectacular gestures of these men, women, and children, in each of their looks, one can guess the weight of the horrors they lived thru, the drama of uprooting. But also a little of their hope for a future that promises to be fragile.

I was born in France, I lived in Spain for a few years and I am currently living in New York City. Self-taught photographer, I am inspired by humanist photography in black and white, and more particularly by some of the great masters such as Sebastiao Salgado, Raymond Depardon, Mary Ellen Mark or Robert Frank.

My photography is almost exclusively in black and white because I especially like working the light, shadows, contrast. I am touched by the subtlety and sensuality offered by black and white, the nuance that must be sought; the effort the film demands otherwise the proposed image is binary and bland. But paradoxically, I also like its radicality because precisely, the represented world is “black and white”.

My photographic work is at the crossroads of art and documentary. I am committed to producing an aesthetic and neat photo, meticulously composed with however a certain imbalance. But I also take care to get closer to the subjects photographed, to report the social, historical and geographical context in which they live and thus tell their story.

The topics I cover are essentially about migration between the North and the South, as well as the American society. I have done several series around migration issues between the United States and Mexico. I have also completed several works dealing with “deep America”. In recent years, I have been able to exhibit my work in different galleries festivals and events in Europe and the United States.