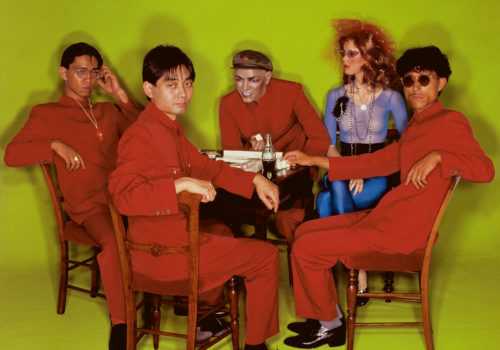 For Sukita, the creative mastermind behind the iconic cover for David Bowie‘s album ‘Heroes’, photography is an expression of a “fundamental secret” shared between artists: a spiritual communication that transcends the minutiae of language.

Born and raised in Kyushu, Japan, Sukita’s reverence of American and Western counter-culture lured him to New York and London. He immersed himself in the western music scene which he loved, while his relaxed photo sessions endeared him to many celebrity figures, including David Bowie and Iggy Pop (with both of whom Sukita had a 40-year long professional relationship), Marc Bolan, and Japanese musician Hotei, best known for his work on the Kill Bill soundtrack. His work spans the early US and UK seventies rock scene, the London punk-rock era to the present crop of emerging Japanese rock artists. This photo book is the first time the photographer has collaborated on a major retrospective of his career and includes some of his early documentary work and his rarely-seen travel and street photography. It introduces the artist through two essays that explore his place within the wider context of both Western and Japanese photography, presented alongside the many iconic shots of both Western and Japanese artists that earned him his eternal reputation.

“It’s very hard for me to accept that Sukita-san has been snapping away at me since 1972, but that really is the case. I suspect that it’s because whenever he’s asked me to do a session, I conjure up in my mind’s eye the sweet, creative and big-hearted man who has always made these potentially tedious affairs so relaxed and painless. May he click into eternity.” – David Bowie

Masayoshi Sukita was born in a small coal-mining town in the north region of Kyushu, Japan, in 1938. His father was killed on the front line in China during World War II. Though he died when he was just seven, Sukita has vivid memories of his father taking photographs. When he was a child, Sukita’s uncle would take him on trips to the cinema, something that would influence him throughout his life. In his teens, Sukita would cycle 100km to see imported American films. Sukita was most inspired by films starring Marlon Brando and James Dean, and those in which he encountered rock ’n’ roll. He credits film and music for teaching him expression in his photography.