Aaron Siskind : the life of traces 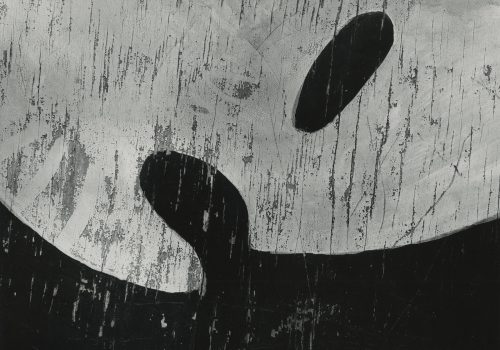 The American photographer (1903-1991) delivered an astonishing work on the shores of abstract expressionism. About forty of his photographs are exhibited at the gallery Les Douches in Paris.

He knew the language of the walls, their incredible expressiveness, their palimpsest of images and words that form so many successive layers that he decided to immortalize. Aaron Siskind used his camera with softness and sensuality on the walls of the cities, as a skillful jazz player, gifted for his instrument, and realized touching, engaging paintings, which catch your soul in a je-ne-sais quoi -that is strong and deep. The first photograph exhibited in the gallery Les Douches is a piece of wall where some scrawny fragments of a poster remain. We are directly seized by the photographer’s taste for the aesthetics of the vestige, the ruin, and its unheard-of meaning to capture it. In Chicago, Mexico City, New York or Los Angeles, Siskind was interested in the traces that populate a surface and revealed to us all the asperities.

It is thanks to what he will call a “pictorial experience” that Siskind, in the summer of 1943, embarks on a new way of doing photography. He was then in the fishing village of Gloucester in New England and  followed a singular discipline: to make six images every day and work in a small area. When he printed his photographs the following winter, Siskind discovered “a way of making an image” that he had “never dreamed of before” as he said in a 1963 interview and he added, “Well, when that happen to you, you just have to continue! “. Thus will be born the work of a master of   abstract expressionism  that will make photography a vector of the imaginary, an open door to the dream. By looking at his images, we are in contact with forms and the feeling of a matter that awaken our imagination, arouse dreams and melancholy. Like the mirror of a past, the space-time of a passage, the life of a trace.