A large archive of Syrian photographs is excavated 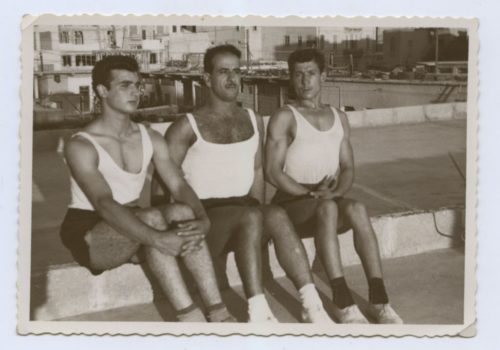 A few months ago, the Russian photographer and editor Xenia Nikolskaya stumbled across a Facebook post by one of her friends: it showed a family photograph representing Syria in all its glory, the land of elegant soirées and carefree picnics. After a few inquiries, she learned that the images came from a second-hand shop somewhere on a main Damascus thoroughfare known as Straight Street. It was the type of shop where you find anything and everything. “There is a knick-knack for every occasion. When [the shopkeeper] learned I was Russian, he even pulled out a book on Russian farmwomen!” laughed Nikolskaya, who traveled to Syria on a moment’s notice just to rummage in the archives of this curious collector.

Upon arrival, she was shocked by the city under siege: “there was no electricity in the streets, men wearing fatigues were everywhere and no one knew who they were, and everyone was carrying a gun,” described Nikolskaya. Soon, she discovered the odds-and-ends boutique right in the middle of the old Roman road. “To me, this was symbolic, because it’s about archeology. From Roman ruins to dusty images you go through multiple layers of human activity,” she explained.

Dust not only gave the title to one of her photography series — an inventory of neglected architectural heritage in Cairo, Egypt — but it has become her obsession. Among others, she did a series on the vestiges of Abkhazia and, while working for the Russian press agency Sputnik International, she unearthed the work of Anatoly Garanin. A long-forgotten anti-hero of photojournalism, starting in the 1920s Garanin kept record of the history of Soviet Russia in a way that undermines all traditional representation of the Cold War era.

With the Syrian archive, titled On the Street Called Straight, Nikolskaya once again subverts stereotypes resulting from a one-sided perspective: “It’s quite ironic if you put it in the context of contemporary European history and the refugee crisis. This archive gives Europeans the tools to understand what they are dealing with. The level of ignorance is so high that people are astonished to see well-dressed Syrians, as if all men walked in rags and all women wore veils. There is a deeply ingrained stereotype that I hope to eradicate with this project.”

Beyond salvaging images — thanks to a trip financed by The Museum of Mediterranean and Near Eastern Antiquities in Stockholm — Nikolskaya’s project aims to embody the photographed subjects. And this, with the help of The Washington Post journalist, Heba Habib. With that in mind, she selected four main series covering the years 1950 to 1980. “It’s like an archeology of the image. I would recognize the same persons from one picture to the next, and began reflecting on their lives. Now I invite other people to collaborate on this project to find individual traces or recreate their story in one way or another.”

The first series focuses on a powerfully built man. “He was a firefighter and a coach in a sports club,” explained Nikolskaya. He can be seen alternatively surrounded by students and flexing his biceps and puffing out his chest, posing like in a Buster Keaton film or a Leni Riefenstahl photograph.

Next there are male ID photos. “The shopkeeper has a rather random way of pricing photographs. For him, an image representing an elegant woman is expensive, whereas these portraits of men are not worth a penny,” commented Nikolskaya. Packed into hundreds of old sugar tins, these photographs represent as many Syrian generations.

Nikolskaya also purchased a family album dated 1980, documenting a family summer vacation. The final set of photographs retraces the life of a social matriarch, Marie Rose Krikorian. “It’s clear that she was an important character. By poring over the archive, I learned who her children and her husband were; there is even a page from her husband’s passport indicating his height, his eye color, and his profession, ‘unemployed’,” said Nikolskaya. We can see a couple attending formal receptions in chic hotels in Beirut, their children’s baptism, and school trips around Syria.

A diplomat’s wife, or perhaps a singer, as the shopkeeper suggests? “He doesn’t know anything about these people, but he imagines. Judging from her lifestyle, he thinks the woman must have been a singer. People start telling a story and you believe them. You project your ideas onto others’ lives. When I see photos of dancing couples, I think of Godard’s films, but perhaps their life was completely different from what I have composed by editing it,” she concluded.

Laurence Cornet is a journalist specializing in photography and independent exhibition curator. She lives in New York and Paris.