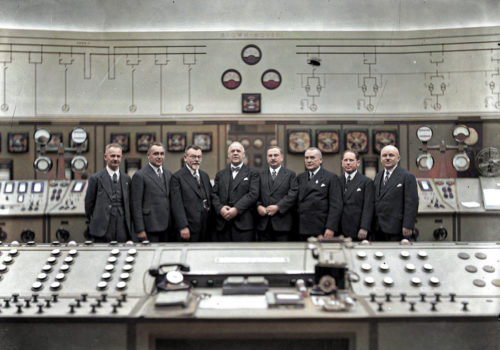 In the third largest city in the country, for two decades now, an event dedicated to photography has attracted a diverse and curious audience. This year, for the anniversary edition, festival founder and director Krzysztof Candrowicz has simply chosen his hometown as the theme.

Łódź is an old industrial town that developed around textiles at the end of the 19th century. From a village, it became the second largest city in Poland, densely populated by a Jewish community that was massively deported and decimated by the Nazi regime during World War II. Playing the role of capital for a few years in place of Warsaw after the war, it has since experienced a slight decline in its population and has found in particular in cultural life a way to remain dynamic. The photo festival invented by curator and artistic director Krzysztof Candrowicz is fully in line with this movement, taking over the old rehabilitated industrial areas of the city. It unfolds naturally in the old factories that have become dapper centers of art, bringing an air of celebration and candor in these last days of June.

This year, to twice celebrate ten years, Krzysztof Candrowicz and his team have decided to exhibit on the ground floor of the central building where the event takes place, photographs related to the city itself, from the industrial past to the current question of industrial wasteland. It was touching to see the inhabitants of Łódź on the opening night looking with curiosity and emotion at the images of the factories of yesteryear made by a certain Wiktor Jekimenko, this universe of immense brick buildings and smoking chimneys all over the city, which ‘they would have almost forgotten without these direct and strong visual testimonies. Next to it, the delicate views of Artur Urbański reveal the post-war wandering spaces, the cracks in the thick walls, the courtyards damaged by years of political and economic instability, where the vital momentum remains of the inhabitants that people these spaces. Further on, Maciej Rawluk’s work questions the future of abandoned factories, particularly enjoying pointing out the ubiquitous dimensions of the return of nature.

It is true that in Łódź vegetation reigns supreme, like a sort of victory for the planet over all past human activity. This very mild and green climate, evoking at times what we might call a “dolce vita de l’Est”, is a perfect setting for looking carefully at the works of authors from all over the world. Thus, upstairs, we can happily stop on the images of Federico Estol who honored a community of shoe-shiners in Bolivia and developed a very interesting reflection on the need for the commitment of the maker of shoes. ‘images, redistributing the money collected to those who made possible the birth of this work, the models photographed. Not far from there, the photographs of the Belgian Colin Delfosse question our representations of poverty in Africa as well as the past of the colonizing countries, here in particular Belgium, with portraits with theatrical aspects that arouse both smiles and reflection. The portfolio readings also enabled young photographers, some of them from Poland, to present their work in progress and to collect the opinions of curators and art critics.

But the strongest emotion of the festival this year, without it being really planned and certainly not wanted, was the reception of “Minsk Photo Month”. Banned in its country, the event is as if exiled here, in a form of survivor of the immense political and social protest movement that has taken place in Belarus since last fall after the refusal of the dictator in place to recognize the democratic vote. The images of this European country which is experiencing the darkest aspects of totalitarianism show how all human expression, in its richness and sincerity, is a bulwark against the blindness of executioners and fascists, a real cry in the tranquility of Łódź.