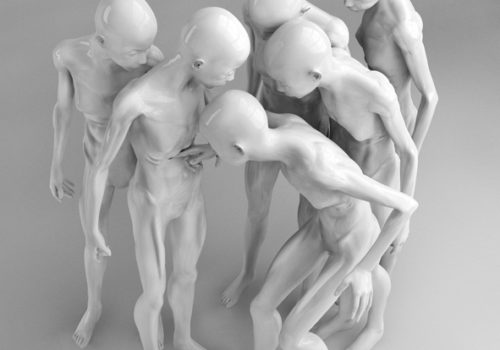 China is overflowing with photography festivals some of them putting out figures such as 400 events per year.  If the level of these events are sometimes dubious, this boom show  the commitment of the Chinese art scene to include the medium in contemporary discussions.

Under the executive artistic direction of Nicolas Havette, the China International Photographic Art Festival in Zhengzhou (CIPAFE) puts the bar one notch higher.  Far from bowing to the tyranny of the international market, which too often tends to imprison local contemporary art in a hyper-manipulation of the photograph, the festival offers a program recounting the history of Chinese photography, from the archives with propagandist marks of the 1940’s industrial era of Zhengzhou,  to the daily poetic meditations of Song Hao Ran. There is even room for virtual photography, with the work of TTY. The whole is completed by an amazing and sharp selection of foreign works, of which the most caustic was a conference on the new Burmese photography documentary presented by Christophe Lovigny.

Shengda, the impressive building that became the first public space entirely dedicated to photography in China (the first of a series that will be inaugurated in the coming months under the direction, among others, of Xu Zhi Qiang, who is also CIPAFE’s general curator) will exhibit the most committed of artistic choices. And this all happens in a still largely conservative local context, rejecting the blurry, the disconnected hanging à la Wolfgang Tillmans, or deconstructed framing.  Each exhibition has its dedicated scenography, its type of print, and its format.

Presented as a memorial to the children of the Revolution, the historic photographs of these armed toddlers are installed on the floor on horizantal headstones surrounded by flowers.  Even more informal is the scenography upstairs.  “It’s absurd,” announces the introductory text of Jean-Christain Bourcart on his series made in Camden, New Jersey, “I just searched the Web for the most dangerous city in the United States.  I wanted to find this strange energy that clears the streets where social rules and constraints are abolished or impaired.  A feeling of liberty mixed with the excitement of danger.  I wanted to assure myself that it was still possible to reach out to others who appear to us to be so distant, so foreign.” And indeed, it started outside, on the parking lot of the Camden Rescue Mission, before approaching the inhabitants of this beat up city little by little just enough to penetrate their homes or their dilapidated squats.  The exhibition follows this progression, strewn with texts of the photographer recounting what the images cannot tell of their encounters, and concludes with a video putting the viewer directly in front of some indocile residents.

The video, incidentally, is spotlighted by the festival in the programming of a few photographic films (montages a few minutes long offering a new narration for a fixed image).  From the documentary of Pablo Ernesto Piovano on the consequences of agricultural experiments on the Argentinian population to the brazen animation of Robin Lopvet on the transformation of landscape.  The selection focuses on demonstrating the possibilities of this still only slightly used medium.

The aesthetic and pedagogic methodology is clear; it’s about covering the field of writing to inspire the younger generation to appropriate the medium.  We start with the classics, notably with the Brazilian photojournalist Evandro Teixeira, who recounts in black and white the remarkable events from his country, and the Chinese photographer Zhu Xiamin, whose “monument images”, in the words of Nicolas Havette, swing between documentary and propoaganda.  And we end with the avant-garde by presenting all that can be found between the two.  By putting part of the exhibitions outside on two-meter blocks arranged along a popular lakeside promenade, the festival reinforces its willingness to tickle photographic creativity.