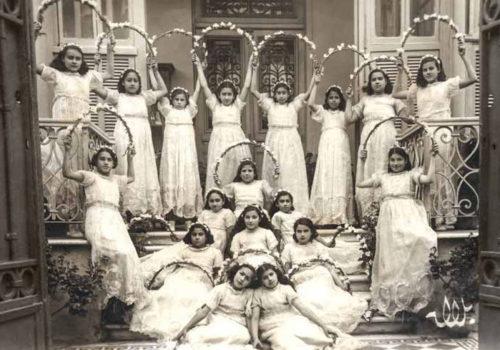 A stunning collection of vintage studio photographs from Egypt, including princes, pashas, and members of the now vanished ruling class, presented in a sumptuous edition.

From the invention of the camera, photographers, like painters, have sought to portray other people, and early studio photographs, with their highly stylized props, poses, and costumes, offer a beguiling window onto the prevailing fashions, tastes, and attitudes of their time. The portraits in this book, Egyptian studio photos from the mid-nineteenth century to the Second World War, tell such a story, their popularity and art then driven by the burgeoning presence of photo studios across the country. In their rich variety, they offer vivid evidence of the democratization of the image as access to the technology spread from members of Egypt’s royalty to an ever-wider circle of subjects. But, more than that, they freeze time, by capturing human subjects that are no longer there. These portraits, and the studios that created them, evoke haunting fragments of a vanished past and invite us to endless speculation and contemplation. In the age of the selfie, their power to speak to us from the mists of time cannot be overstated. Includes over 200 stunning images, from the work of 81 photographic studios.

About the author
Sherif Boraie is an editor and publisher based in Cairo. He founded his imprint, Zeitouna, in 1988, under which he has published forty highly illustrated books on Egyptian history, from the pharaohs to modern times.

Youssef Rakha was born in Cairo in 1976. He received a BA in English and Philosophy from Hull University, England, and since then has worked as a writer, copy editor, and cultural editor-cum-literary critic at Al-Ahram Weekly, the Cairo-based English-language newspaper. He was also the founding features writer at the Abu Dhabi-based daily the National. His work has appeared in English in the Daily Telegraph, the New York Times, Parnassus, Aeon Magazine, McSweeney’s, and the Kenyon Review, among others. He is the author of seven books in Arabic, two of which, The Crocodiles and Book of the Sultan’s Seal are available in English. Rakha was chosen as one of the best known and loved new voices of modern Arabic literature at the Hay Festival/Beirut World Book Capital competition, Beirut39, in 2009.